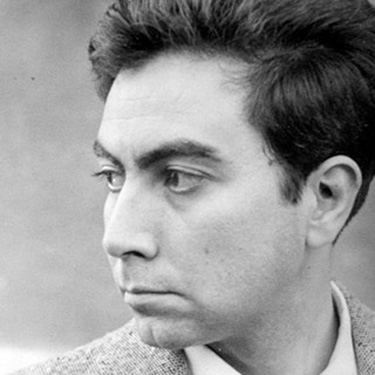 Antoni Tàpies was born in Barcelona into a highly literate family – his father was a lawyer and his mother’s family had been involved in selling books for generations. During his childhood, Tàpies experienced the ravages of the Spanish Civil War which still scar Barcelona to this day, and this had a huge influence on his later works. Suffering from tuberculosis as a teenager which then caused a heart attack during his teenage years, Tàpies spent a long period recuperating in a sanatorium in the mountains near Barcelona; this gave him a chance to read widely, revealing an appetite for knowledge that would become increasingly voracious. When he enrolled at university to study law at the encouragement of his father, he also began to take lessons in drawing, eventually leading him to abandon law for art.

Tàpies’s early works showed a number of influences, including Vincent van Gogh and Joan Miró, and later Paul Klee. The pictures often featured figures and creatures that appeared mystical and mysterious, filled with a Surreal ambience. At the same time, the picture surface was often finely worked and heavily impastoed, revealing an early interest in his materials that would come to the fore in later years. This was all the more evident in his collages of the period, which often involved fragments of newspaper used to create mysterious compositions, such as Creu de paper de diari of 1946-47, now in the Antoni Tàpies Foundation.

Tàpies’s link to Surrealism was strengthened in 1948, when he joined a number of other figures including his friend the poet Joan Brossa in founding the group, Dau al Set. This was a more pointed decision under the regime of General Franco; despite the risks, the group published a magazine without permission that advocated a more liberal strain of art than that favoured by the authorities. In 1950, Tàpies was awarded a scholarship that saw him travelling to Paris, where he was introduced to a number of figures from the avant-garde, and to their works. From this point, he began to shift away from the fantastical, semi-figurative works that had hitherto dominated much of his output, creating increasingly textured and abstract works that saw him approaching Art Informel, of which he would become one of the most celebrated proponents. By the mid-1950s, he was using a variety of materials in his works, be it in terms of the marble that he used to thicken his paints or the elements such as violins, clothing and corrugated iron shutters that he would use within their very fabric.

The works that Tàpies created showed a rich variety of techniques which allowed him to achieve textures that were sometimes seen as references to the shrapnel-pocked walls of his native Barcelona. Such associations were strengthened both by his use of crosses as a recurrent symbol and also by his political activities. The cross in particular held a variety of meanings: it marks a spot, it is a sign of existence, a signature, a ‘T’, and at the same time is the crucifix, the grave marker, the sign used in the newspaper notices announcing deaths in Spain. All of these meanings are combined in Tàpies’s works, which are both celebrations of life and demonstrations of its fragility. In his later works, fragmentary religious iconography would sometimes appear, as would references to the Zen Buddhism that increasingly fascinated him. “For me, art is a mechanism, a system that makes it possible to change the spectator’s way of looking and to bring him or her closer to a state of contemplation of reality at its deepest level”, Tàpies explained. “The artist is like the mystic: each one acts in his own way but their common purpose is to achieve the inner illumination that enables them to perceive the depths of reality” (Tàpies, quoted in ‘Antoni Tàpies: Catalan artist celebrated for his use of found materials’, The Independent, 8 Feb 2012, reproduced online).