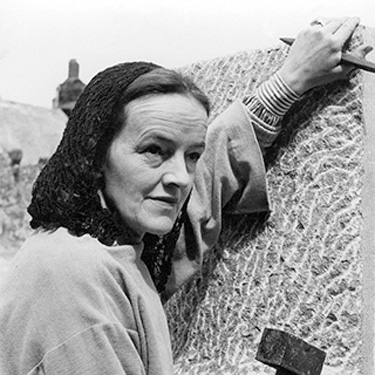 Dame Barbara Hepworth was one of the greatest British sculptors of the 20th century. As such, in her international stature, she is rivalled only by her friend Henry Moore. Her abstracted forms retain a searing and elegant sense of modernity to this day.

Hepworth studied at the Leeds School of Art before being awarded a scholarship to the Royal College of Art. There she met Moore, among others. She remained at the college to compete in the Prix de Rome; this was won by John Skeaping, with whom she would travel and whom she would marry in Florence in 1925. The pair would spend a significant amount of time on the continent, a formative experience, before returning to London, where Hepworth acquired the Hampstead studio she would retain until 1939 and her move to St. Ives.

During the 1920s, Hepworth had become interested in the idea of direct carving, and this remained central to a number of her works. She gradually gained in recognition during the 1920s, exhibiting several times. However, it was in many ways after meeting and falling in love with Ben Nicholson that her career changed tack. With Nicholson, with whom she had triplets, Hepworth travelled to France, meeting various luminaries of the avant garde, including Pablo Picasso and Constantin Brancusi. In particular, they became involved with the Abstraction Création group, partly through the British groups, the Seven and Five Society and Unit One. This brought them into contact with artists such as Wassily Kandinsky and Piet Mondrian. Hepworth’s sculptures had become increasingly abstract during this period, often eschewing figuration, for instance in works such as Pierced Form, Two Forms and Large and Small Form. With the Seven and Five group, Hepworth participated in the first fully abstract exhibition to take place in Britain, held at the Zwemmer Gallery in 1935. The following year, she was also involved in Abstract & Concrete, which was held in Oxford before travelling to several other locations, where her works were shown alongside those of artists such as Hans Arp, Joan Miró, Alexander Calder and Mondrian.

At the outbreak of the Second World War, Hepworth and Nicholson lent assistance to Mondrian, hoping to convince him to stay in Britain and work alongside them; after a fruitful stay, he left for New York, where he died a few years later. Hepworth and Nicholson moved to St. Ives. While Nicholson would eventually move away as their marriage foundered, Hepworth became increasingly entrenched in St. Ives. At first, they had lived in small spaces, meaning that neither artist was able to work on any significant scale, but these restrictions gradually eased, leading to a new sense of liberation in each of their oeuvres. Over the coming years, Hepworth would create some of her best-known works, many of which were designed for public spaces including the 1951 Festival of Britain and the headquarters of the United Nations in New York. She was given a string of exhibitions during this period which helped to propel her to the attention of a wider international audience, while numerous critics also wrote about her work. She would come to win vast acclaim, plaudits, awards and degrees over the coming decades. Hepworth died in a fire in St. Ives, but her legacy there is particularly strong: the Barbara Hepworth Museum was founded afterwards, and is now owned and administered by Tate. 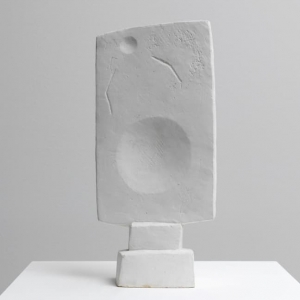