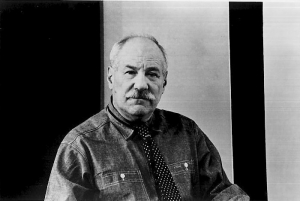 Barnett Newman was one of the most renowned artists associated with Abstract Expressionism. His unique ‘zip’, the vertical strip of colour that he developed in 1948 and which became the basis of much of his art over the remaining decades of his career, placed him at a distance from some of the gesturality of his colleagues, the so-called ‘Action Painters’. At the same time, the rigorous and elegant simplicity of that vertical bar of colour would come to inform new generations of artists, ranging from the ‘Color Field’ painters among his contemporaries and successors to the proponents of Minimalism such as Dan Flavin and Donald Judd.

Considering the impact that Newman’s works have had, and the popularity they still hold today – for instance when they are shown in museums, sometimes juxtaposed with the soaring sculptures of Alberto Giacometti – it is perhaps surprising to find that he had all but abandoned art as a vocation only shortly before he discovered the ‘zip’. Newman had been born in New York, the son of Jewish Polish immigrants. Although he studied at the Art Students League, his early years revealed him focusing on writing, on his father’s clothing company and on politics – he even ran for mayor. Art remained an important element for him during this time, in particular through his writings. In addition, he had become friends with many of the members of New York’s avant-garde during the time, including artists such as Adolph Gottlieb, Jackson Pollock and Clyfford Still. He had also come to know John Graham, one of the intellectual lynchpins of that wave of artists, a man who brought an intellectual rigour, an erudition and a knowledge of both tribal and contemporary European art to a new generation of eager-to-learn artists in New York.

Newman concentrated almost entirely on his writing during the early 1940s, essentially ceasing any artistic production during much of the Second World War. However, in the wake of this period, he created pictures that revealed a strong interest in Surrealism. Mysterious, amorphous biological forms began to people his pictures, as did vertical streaks. These ultimately gave way to the single ‘zip’, created using masking tape in Onement I in 1948, now in the Museum of Modern Art, New York. This new departure would come to underpin much of Newman’s subsequent production. The vertical strip avoided narrative or anecdote, which Newman himself shunned; it resolved any conflict between foreground and background; and it had a vital, universal energy, similar to the jagged strips of vertical colour in Still’s paintings. The ‘zip’, usually shown on canvases that dwarfed their viewers with their sheer monumentality, was also totemic: it is no coincidence that Newman himself was hugely interested, and even curated an exhibition on, the native art of North-Western America.

Newman had helped organise and write about exhibitions for the legendary dealer Betty Parsons for some time; in 1950, she gave him a one-man show, which his friend and fellow painter Mark Rothko helped to install; the reception was mixed to the point that one of his pictures was actually vandalised during the show. However, Parsons gave him another exhibition the following year. The scale of his pictures had exploded with his move to a new, larger studio on Wall Street in 1950. Reflecting this, at his second show, Newman included instructions encouraging his viewers to see the pictures from up close, immersing themselves in colour.

Although Newman exhibited little publicly during the rest of the 1950s, his reputation grew steadily; Clement Greenberg came to organise one of his shows at the end of the decade, and the Solomon R. Guggenheim Museum granted him his first museum exhibition in 1966. He expanded into lithographs and sculptures, for instance his iconic modern totem, Broken Obelisk, examples of which are owned by the Museum of Modern Art, the Smithsonian American Art Museum and Storm King Art Center; another is located outside the Rothko Chapel founded by John and Dominique de Menil in Houston, Texas.