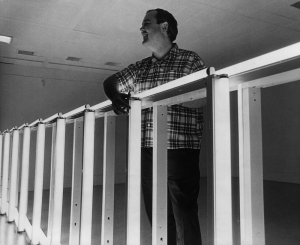 For his entire career, Dan Flavin was fascinated by the remarkable effects that could be achieved through fluorescent light. Using prefabricated lamps that were available only in a limited number of standardised lengths, colours and diameters, Flavin carved out a unique oeuvre that was radical in both conception and execution. His emphatic use of modular industrial materials and the erasure of the artist’s hand from the object represents a quintessential example of the burgeoning ideas related to Minimal and Conceptual art that arose in the 1960s.

Flavin was born in Jamaica, New York in 1933 and raised in a devout Catholic family. He attended a preparatory school for the seminary, but after graduation enlisted in the United States Air Force. It was while serving as an air weather meteorological technician in Korea in 1954 that he first studied art through an extension program run by the University of Maryland. On his return to New York in 1956, Flavin undertook further brief stints of training in art and art history at the Hans Hofmann School of Fine Arts, the New School for Social Research, and Columbia University.

From 1959 to 1960, Flavin was employed as a guard and elevator operator at the Museum of Modern Art, where he met the artists Sol LeWitt and Robert Ryman and curator Lucy Lippard. At this time, Flavin was creating mixed-media collages of found materials, which he displayed in his first exhibition, at the Judson Gallery, in 1961. That same year, Flavin began the first of his works to incorporate light. He referred to these box-like assemblages studded with incandescent and fluorescent bulbs as ‘icons’, evoking associations with Catholic iconography as well Kazimir Malevich’s proto-minimalist masterpiece Black Square.

By 1963, Flavin began to work solely with his signature fluorescent tubes after creating the breakthrough work the diagonal of May 25, 1963 (to Constantin Brancusi), Dia Art Foundation, New York, which comprises a single yellow fluorescent light placed on a wall, at a 45-degree angle rising from the floor. Flavin observed that the unadorned tube ‘seemed to sustain itself directly, dynamically, dramatically’, requiring no further intervention other than a careful consideration of the hue and intensity of the light, and its placement within a given architectural space. Further tributes to Flavin’s artistic heroes followed with the 1966 work greens crossing greens (to Piet Mondrian who lacked green) commissioned for the Stedelijk Van Abbemuseum in Eindhoven and his extensive series of ‘monuments’ to the Russian Constructivist Vladimir Tatlin. While Flavin famously quipped that his art ‘is what it is and ain’t nothing else’, the evocative titles of such works, and the peculiar atmospheric effects of light belie the reductive, self-referential ethos typically attributed to Minimalism.

Through relentless experimentation, Flavin learned how to masterfully manipulate the limited number of combinations proposed by his standardised light fixtures. In the 1970s and 1980s, he began to create increasingly complex and expansive configurations with his large ‘barriers’, ‘corridors’, and corner installations. He spent much of his later career designing large-scale architectural interventions (he preferred the terms ‘situations’ or ‘proposals’), including at Grand Central Station in New York, the Solomon R. Guggenheim Museum in New York, the Hamburger Bahnhof – Museum für Gegenwart in Berlin, and Donald Judd’s Chinati Foundation in Marfa, Texas – the last completed posthumously. In 1983 he established the Dan Flavin Art Institute in a converted firehouse in Bridgehampton, New York. Now managed by the Dia Art Foundation, the Institute created a permanent setting for his art while also providing a temporary exhibition space and printmaking facility.

Flavin’s work has been collected by public institutions worldwide. Major museum retrospectives include those organised by the National Gallery of Canada in Ottawa in 1969, St. Louis Art Museum, 1973, Kunsthalle Basel, 1975, the Museum of Contemporary Art in Los Angeles, 1984, and the Dia Art Foundation in association with the National Gallery of Art, Washington, DC, which travelled internationally from 2005 to 2007. More recently, Flavin’s work has been presented in significant institutional solo shows at the Museum Moderner Kunst Stiftung Ludwig Wien, Vienna, 2004, the Kunstmuseum St. Gallen, Switzerland, 2012-13, the Lotte Museum of Art, Seoul, 2018, and the Institute of Contemporary Art, Miami, 2019-20. Flavin died from complications caused by diabetes in 1996.