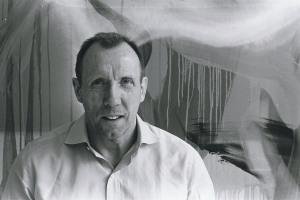 David Dawson is a London-based painter of landscapes and an inspired photographer of people. Dawson is perhaps best known for his photographs of Lucian Freud’s daily life and his behind-the-scenes images of the notoriously camera-shy Freud provide an intimate portrayal of the painter at work, capturing his studio, subjects and paintings in progress. These evocative photographs of a very private practice are now indelibly linked with Freud’s work and have been displayed alongside his paintings, in standalone exhibitions, and are featured in several monographic publications on the painter’s life.

Born and raised in Wales, Dawson moved to London to attend the Chelsea College of Art from 1984 to 1987, followed by the Royal College of Art from 1987 to 1989, where he was a close friend of Tracey Emin. At the conclusion of his Master’s degree, he took a job with Freud’s then gallerist James Kirkman, who brought him to Freud’s house and studio in Holland Park. As a young painter, Dawson was attracted to the action and experimentation of the mid-century American painters Willem De Kooning and Jackson Pollock and intended to move to New York, but he was so captivated by his encounter with Freud’s in-progress portrait of performance artist Leigh Bowery that he changed his plans. He was soon enlisted to help Freud in his studio in the mornings and evenings, and was free to spend his days developing his own practice.

Over the course of their twenty-year relationship, Dawson became much more than an assistant to Freud – he was a trusted friend and confidant, and one of his most frequent subjects. Freud’s portraits of Dawson include Sunny Morning, Eight Legs, 1997 (Art Institute of Chicago), David and Eli, 2003 (Tate, London) and Freud’s final painting Portrait of the Hound, 2011.

Dawson first began photographing Freud at work around the year 2000. ‘I never kept a diary and didn’t want to,’ Dawson has stated. ‘But because I was so fascinated with what was going on in the studio I would have a little camera and take a picture or two. It started really when I was taking a picture of David Hockney in the studio, who had been sitting for Lucian, and Lucian walked in.’ 1 Freud liked the double portrait and Dawson was thereafter free to photograph as he pleased, capturing the painter and models that included Kate Moss and the Queen. His photographs have been exhibited at museums across the world and twenty-six of his images are in the collection of London’s National Portrait Gallery.

The subjects of Dawson’s paintings include scenes observed from his suburban home in Kensal Rise, cloudscapes, the hills of Wales, and views over New York. His work marries painterly abstraction with an empirical study of the world. ‘I feel I am at my freeest and at my most open and ambitious when I have got something to respond to – an external motif,’ he explains.2 Dawson has exhibited paintings with Marlborough Fine Art, London in 2004 and 2011, Pallant House Gallery, Chichester in 2012, and Faurschou Foundation, Beijing in 2012. His painting of Freud’s studio, Table for Paints and Brushes, 2017 is held in the British Government Art Collection and currently hangs in Downing Street. Dawson currently serves as the director of the Lucian Freud Archive.