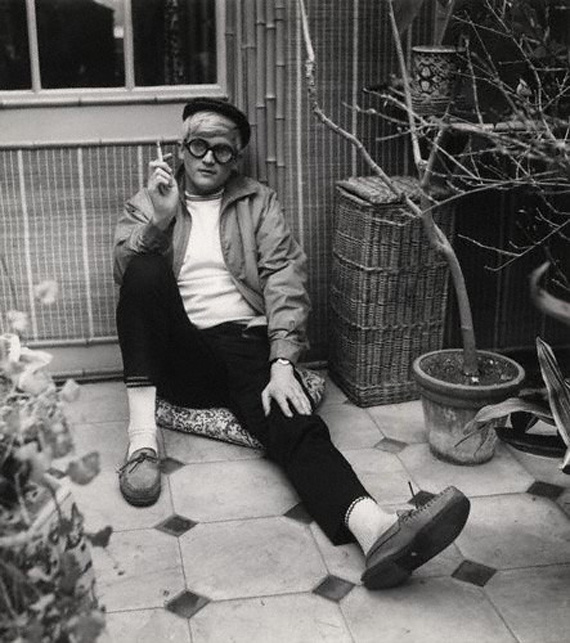 David Hockney is one of the most beloved of living British artists, as was demonstrated by the crowds thronging the Royal Academy in London in 2012 for A Bigger Picture, an exhibition focused on his recent works. While that show concentrated largely on his celebration of the landscape of Yorkshire, his most famous works also include his seductive images of rippling water in the swimming pools of California, a state whose siren call he heard decades ago and followed, becoming one of the great chroniclers of life there.

Hockney’s talent was recognised early on, and he attended the Bradford College of Art before heading to the Royal College of Art in 1959. There, he came into contact with a range of young contemporaries whose launch onto the art scene would be seen as one of the pivotal moments in the creation of British Pop. It was in part thanks to the influence of an older student, R.B. Kitaj, that Hockney began to create images that were more true to himself. Within a short amount of time, he tapped into a rich, playful seam of inspiration that often took openly gay subject matter, for instance We Two Boys Together Clinging of 1961, now owned by the Arts Council, in which the eponymous figures are rendered in a deliberately vigorous manner that recalls graffiti; over the picture are inscribed the words of the title, taken from a poem by Walt Whitman.

It is a mark of Hockney’s character that he was threatened with failure at the RCA as he refused to submit an essay justifying his work, claiming that the pictures should speak and be judged for themselves. He even etched a graduation form for himself; the RCA backed down, changing the rules, and indeed in 1962 he was awarded the gold medal.

By that time, Hockney had had a taste of life on the other side of the Atlantic during a 1961 visit to New York. In 1963, he moved to California, settling in Los Angeles. There, he began to create pictures which appeared deceptively illustrative, for instance his images of men in swimming pools and of collectors in their houses. His double portraits, from both sides of the Atlantic, often featured a near-photographic precision, for instance Mr and Mrs Clark and Percy of 1970-71, in Tate, London. In that work, his old friend, the designer Ozzie Clark, is shown with his wife, Celia Birtwell, as well as their cat, in a large interior. This work is both a reinvigoration of tradition and a highly personal chronicle of friendship: he was the best man at their wedding.

Since then, Hockney’s works have become icons of our age. He has worked in a number of styles, often referencing, say, literature or Pablo Picasso. He has also been involved in set design for the theatre. He is a formidable draughtsman and printmaker, and also has a yearning for innovation. This has been seen in his landscapes created through assemblages of photographs all taken from the same spot with slightly different angles, creating refracted panoramas, or his more recent works made on iPads, many of which were included in his show at the Royal Academy.