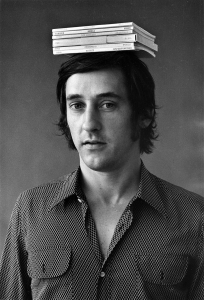 Ed Ruscha is an exponent of the pop and conceptual art movements, whose work is inextricably linked to the landscapes and vernacular of America’s west. His enigmatic word-based paintings, drawings, prints and photographs, evoke the banal spectacle of Los Angeles and the sign-scattered highways that stretch across the United States. Billboards, gas stations, movies, smoggy sunsets, foodstuffs and comics have all been prompts for his imagery, which is rendered with characteristic precision and an unmistakable sense of cool objectivity.

Born in Nebraska and raised in Oklahoma City, Ruscha moved to Los Angeles in 1956 to study at the Chouinard Art Institute (now the California Institute of the Arts). He never fully embraced the loose, Abstract Expressionist style of painting advocated by teachers such as Emerson Woelffer, but was excited by his discovery of Jasper Johns and Marcel Duchamp, whose work he credits as giving him licence to use commercial imagery and words in his art.

In the late 1950s Ruscha began making collages with found materials, eventually integrating text and everyday subjects and adopting the techniques of commercial graphics. After graduating, he pursued a career at an advertising agency but soon quit. He travelled through Europe in 1961, and returned determined to commit himself to fine art. It was then that he began a series of single-word paintings that treated written language as an object, an image and a plastic element all in one. These include Boss, 1961, now held at The Broad, Los Angeles, Oof, 1962, Museum of Modern Art, New York, and Honk, 1962, Tate, London. In the 1960s he also created some of his most iconic images of his adopted home of Los Angeles, including the 20th Century Fox logo, the Standard Station, the Los Angeles County Museum of Art, and the celebrated Hollywood sign. The strength of Ruscha’s early paintings saw him included in the seminal pop exhibitions New Painting of Common Objects at the Pasadena Art Museum in 1962 and Pop Art USA at the Oakland Art Museum in 1963.

The written word has proved a particularly rich field to mine over the course of his sixty-year career, whether as single words rendered in surprising trompe l’oeil effects or phrases set against towering mountains or a grid of city street lights. Yet Ruscha is equally famous for his numerous artist books, such as Twentysix Gasoline Stations, Some Los Angeles Apartments, and Every Building on the Sunset Strip, which document their subjects in deadpan fashion. He is also known for experimenting with unconventional materials, incorporating gunpowder, red wine, flowers, axle grease and a variety of food products into his work.

Ruscha’s references to popular culture and his interest in seriality and structure place him at the intersection of pop and conceptual art, yet the low-key humour, absurdist juxtapositions and the often disquieting atmosphere of his work defies easy categorisation. He has been the subject of numerous museum retrospectives including those organised by the San Francisco Museum of Modern Art in 1982, Centre Georges Pompidou in 1989, Museum of Contemporary Art, Sydney in 2004 and London’s Hayward Gallery in 2009. In 2005 he represented the United States at the Venice Biennale with his series of large-scale paintings Course of Empire. Ruscha continues to live and work in Los Angeles.