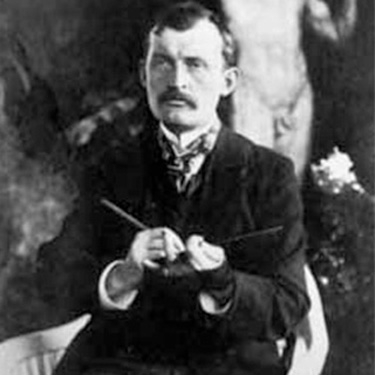 One of the great forefathers of Expressionism, Edvard Munch has become the stuff of artistic legend. He channelled his own mental states into pictures that have become icons, not least his masterpiece, The Scream. In that work, as in many others, Munch revealed a subjective use of colour and form that were used to express his own emotions, attempting to render them in a way that would be recognised by the viewer as well. As Munch explained, ‘My art has allowed me to bare my soul’ (Munch, quoted in R. Stang, Edvard Munch: The Man and the Artist, London, 1979, p. 11).

Munch was born to a family that was well-connected yet poor. His mother died half a decade after his birth, as did his sister the following year. This backdrop of death in his family life was to inform his own personal outlook, as was his own delicate health. Indeed, it was in part as a result of illness that Munch discovered art. After being widowed, Munch’s father revealed a tendency to depression that likewise had a huge impact on the young artist.

Munch became involved in the artistic avant garde in his native Norway at a young age, becoming involved with the Kristiania Bohème, the group that grew around the writer Hans Jaeger, with whom he became friends. In an age of censorship and repression, their ideas about sex and art were radical, and became all the more so as they sought to distance themselves from the establishment. Munch began exploring what would become a recurring theme in his work, that of his own sexual anxieties, caused in part by a complicated relationship with the wife of one of his cousins. During this period, Munch created one of his early masterpieces, The Sick Child of 1885-86, now in the Nasjonalgalleriet, Oslo, a work that received vitriolic criticism at the time yet which is now celebrated for its pioneering subjectivity.

The criticism of The Sick Child in part prompted Munch’s return to a less radical means of pictorial expression over the following few years, not least his time in Paris, when he sometimes painted in a Neo-Impressionist style. However, in the early 1890s, channelling the influences of Post-Impressionism and of poetry alike, this gave way to the explosion of anxiety and expression of Munch’s Frieze of Life and its related pictures. In works such as Madonna, Puberty, The Scream and Vampire, Munch channelled his own feelings in order to create images that invoked a new emotional truth and universality for his age. It would come as little surprise, looking at these works, that Munch would so revere the plays of Henrik Ibsen – he would even create set designs for Max Reinhardt’s production of Ghosts.

Munch’s Frieze of Life was in part a product of Berlin, where he lived for several years during the mid-1890s following an initial succès de scandale: essentially, Munch had been invited to have an exhibition there in 1892, but the nature of his works so scandalised people there that the show was closed early. This resulted in a huge boost to Munch’s reputation among the more avant garde elements of society there, and this encouraged him to explore his themes in increasing depth. This was only increased by an affair with Tulla Larsen, which added to the intensity of some of his pictures.

Munch’s physical and mental health had often been precarious, but in 1908, he suffered a breakdown that resulted in a prolonged period in a Copenhagen sanatorium, where his treatments included electric shock therapy. He subsequently moved back to Norway, where his works were filled with the poetry of the surrounding landscape, not least of his retreat at Asgårdstrand, which he had been visiting regularly over the years, and then of Ekely, the estate he bought in 1916. The landscape nonetheless provided Munch with a backdrop for his visceral explorations of emotional states over the years. Munch lived there until his death towards the end of the Second World War, a conflict during which the radical nature of his vision was once again confirmed by the decision of the Nazis to confiscate large numbers of his works.