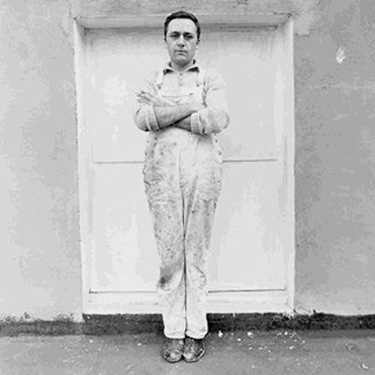 Gerhard Richter is one of the greatest living artists in the West, and his influence has become wide-spread, in part because of his attitude towards image-making and in part through his teaching. He introduced a form of cynicism to art in the post-war era, yet at the same time managed to create pictures that appeared to save the vocation of painting almost despite themselves. In his Photo Paintings, he recreated photographs culled from newspapers, magazines and family albums; in his Colour Charts, he took regular rectangles of pure colour and juxtaposed them; in his Abstracts, he has created pictures, step by step, which are apparently self-generating, that are anti-figurative, that are intended to be inscrutable yet which remain highly seductive, both aesthetically and intellectually.

Richter occupies a unique position, having kept himself away from most labels or movements, showing a reluctance to commit to the various ‘isms’ of contemporary art that may have been based upon his own experiences in his first decades, living under Nazism, Communism and then Capitalism. This appears to have coloured his artistic output, introducing a potent cynicism and sometimes detachment. Richter was born in Dresden; some of his childhood was spent helping with the bomb damage of the Second World War. Afterwards, he attended the Kunstakademie in Dresden, by then part of the German Democratic Republic or DDR, being trained to paint largely in the Socialist Realist style.

In 1959, Richter travelled to West Germany to see Documenta 2 in Kassel. This was to prove an epiphany for him: Richter saw works by Jackson Pollock and Lucio Fontana which opened whole new panoramas of potential. Two years later, before the Berlin Wall was completed, Richter left East Germany with his then wife, picking up some luggage he had left earlier; he then went to the Kunstakademie Düsseldorf. There, he studied alongside Konrad Lueg, Blinky Palermo and Sigmar Polke, who all became friends and collaborators in the coming years.

Within a short amount of time, Richter was tiring of some of the trends in Western avant-garde art that he was encountering. He was painting abstract pictures at the time, when a new revelation occurred: ‘a photograph of Brigitte Bardot fell into my hands, and I painted it into one of these pictures in shades of grey. I had had enough of bloody painting, and painting from a photograph seemed to me the most moronic and inartistic thing that anyone could do’ (Richter in 1964, quoted in Gerhard Richter: The Daily Practice of Painting. Writings and Interviews 1962-1993, Hans-Ulrich Obrist (ed.), trans. David Britt, London, 1995, p. 22). This was the beginning of a new and fertile investigation of the entire nature of image-making. Richter took photographs that sometimes appeared random and inscrutable, yet which often had complex undertones and overtones, and transformed them into paintings. Some of these appeared to mine his own experiences, for instance two from 1965: Onkel Rudi, an image of his uncle in Nazi uniform, and Tante Marianne, depicting an aunt who was sent to the camps under the Nazis. He would later turn to the emotive topic of the Baader-Meinhof group as the subject of his 1988 series ’18. Oktober 1977′, showing incidents in the lives and deaths of the members of the Red Army Faction.

From the mid-1960s, Richter turned to a number of other themes in order to explore the arbitrary nature of images through the medium of painting, be it in his Colour Charts from 1966 onwards, his Townscapes, the ‘Ausschnitt’ series showing magnified paint swirls or his Greys. This would ultimately lead to his abstract works. In these, rather than begin painting with an arbitrary subject to copy, he paints stroke by stroke, often working on several different pictures simultaneously in order to be able to return to each one with a fresh perspective. He often uses squeegees instead of brushes, smearing the paint in order to achieve richly marbled, kaleidoscopic effects. He jettisons any hint of figuration, instead creating surfaces that are richly-detailed, often luscious and even textured, yet which have been painted as though against themselves. In this way, his pictures become microcosms of his own world view, his belief that Nature itself stumbles from accident to accident without any predetermined plan.

In 1967, Richter was made a visiting professor at the Hochschule für bildende Künste, Hamburg, and then four years later was made professor at the Kunstakademie Düsseldorf, a position he maintained for decades. He has been recognised in a number of landmark exhibitions, and museums throughout the world own examples of his works, which have become a part of the contemporary canon.