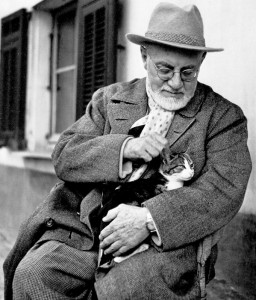 Henri Matisse is widely considered one of the most important artists of the 20th century, a titan who occupies a space matched only by his rival and friend Pablo Picasso. What Picasso brought to the treatment of form in painting, Matisse brought to colour. At the same time, few artists have achieved the mastery of line evident in his draughtsmanship and his prints; meanwhile, many of his sculptures were also considered to be revolutionary, not least the variations on the theme of the Nu de dos, which achieved a progressive, radical stylisation.

Matisse was born and raised in Northern France. He initially intended to become a lawyer; however, in 1889 he was struck with appendicitis, and during his convalescence was given a set of colours by his mother. This was a revelatory moment for the artist; the impact of the gift would reverberate throughout the 20th century, as would his mother’s love of colour.

In the early 1890s, Matisse studied under Gustave Moreau, who instilled in him a sense of the subjective importance of colour. He began to paint in a style that revealed influences of Moreau, of Impressionism and of the Nabis alike, for instance his Table de diner, shown in 1897 at the salon of the Société Nationale des Beaux-Arts. Within a short time, he had adopted Pointillism, a technique that allowed him to use dabs of intense colour in juxtaposition with each other in a loose and expressionistic Neo-Impressionist manner. The success of his Neo-Impressionist technique was demonstrated in one of his early masterpieces, Luxe, calme et volupté, which was acquired by Paul Signac, a compliment in itself, and is now in the Centre Georges Pompidou, Paris.

This led him further down the path of colourism, a path in which he was joined by two young zealots: André Derain and Maurice de Vlaminck. The certainty and energy of these two younger artists confirmed Matisse’s ideas; in 1905 in Collioure, Derain and Matisse worked alongside each other, creating increasingly bold pictures with an incandescent palette. When, in the Salon d’Automne later that year, Matisse exhibited alongside Vlaminck and Derain, Louis Vauxcelles dubbed them the ‘Wild Beasts’, or Fauves.

Matisse’s bold use of colour resulted in a string of works that are now among the icons of modern art, several of which were bought by Gertrude Stein, her brother and her sister-in-law. His Fauve portrait of his own wife, Portrait de Madame Matisse, now in the Statens Museum for Kunst, Copenhagen, was even nick-named ‘La raie verte’, or the green stripe, because of the bold use of that colour to depict shade on her face. Over the coming years, he also created works such as some of the versions of La danse.

During the 1910s, and especially against the backdrop of the First World War, Matisse created pictures that explored space and form, often using more muted colours, in a manner that appears to have been a response to Cubism and to Cézanne alike. Towards the end of the war, Matisse travelled to Nice during the winter in order to paint there. This was to prove a decisive moment. There, he found an intense light and sensuality that would come to flavour his pictures for much of the rest of his career. The odalisques that had intrigued him before, not least after his travels in North Africa, now returned in the form of models painted and drawn in the hotel rooms that he occupied in Nice, in particular one of his greatest muses, Henriette Darricarrère. His works breathed with light and sensuousness; at the same time, there was an awareness that the subject matter was a mere pretext for an enjoyment of form, of swirling arabesques, and of colour.

This love of colour reached a new zenith in his paper cut-outs. Originally using the technique in order to help with the design of large-scale compositions such as his mural, La danse, for Albert C. Barnes in Merion, Pennsylvania, the cut-out soon became a medium in its own right, one in which Matisse achieved a new pinnacle of colourism. With scissors and paper, he felt he could finally synthesise line and colour. It is a tribute to the success and popularity of these works that they have been the subject of a number of large-scale exhibitions, including at Tate, London in 2014.