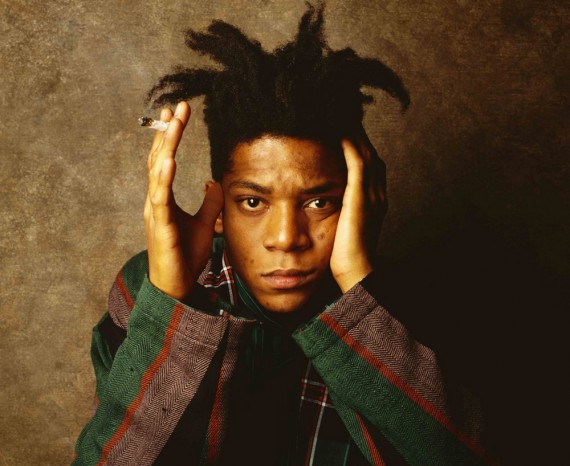 By the time he reached his early twenties, Jean-Michel Basquiat was a veritable art star. His meteoric rise to fame in the 1980s is legendary. Within the space of a few years the penniless and homeless young artist was commanding international attention for his raw, highly-coded paintings that evoke the gritty reality of urban life.

Basquiat was raised in Brooklyn, New York, the son of a Haitian-born father and a mother of Puerto Rican descent. Although he had no formal training in fine art, Basquiat’s mother encouraged him to draw from an early age and often took him to museums as a child. The alternative City-As-School nurtured his creative talents as a teenager but he dropped out at 17 to lead a peripatetic life in Manhattan, supporting himself by selling t-shirts and homemade postcards while participating in the city’s new wave club scene. During this period Basquiat formed part of New York’s nascent graffiti movement and gained notoriety for spray-painting aphorisms under the pseudonym SAMO (same old shit) around the city streets. However, he soon distanced himself from this persona in order to concentrate on painting and drawing.

Basquiat’s work was included in the seminal Times Square show in 1980 and in 1982 he became the youngest artist ever shown in Documenta in Kassel. His inclusion in the 1983 Whitney Biennial bolstered his celebrity status, and by 1985 he was featured on the cover of the New York Times magazine. His vibrant, neo-expressionist canvases incorporated imagery and text derived from autobiographical and pop culture references, layered in a free-flowing style that shared the improvisatory quality of jazz and hip hop. Indeed, Basquiat frequently listened to blaring bebop while he worked and often paid tribute to his favourite musicians in his paintings, forming a pantheon of black heroes that extended to sports stars and personal friends. In 1983 Basquiat was given the opportunity to collaborate with another of his greatest heroes – Andy Warhol. The pair worked together on a series of paintings, initially including Italian artist Francesco Clemente before splitting off on their own. The pop patriarch typically applied his motifs to canvas first with Basquiat following, laying on words and imagery in much the same way a graffitist would erase another’s tag. Despite his success, Basquiat grappled with a growing drug problem that seemed to spiral out of control after Warhol’s sudden death in 1987. He died of an overdose aged only 27, yet his brief incandescent career left behind a substantial body of work addressing such diverse themes such as capitalism, colonialism and racism, that has firmly secured his place in the annals of art history.