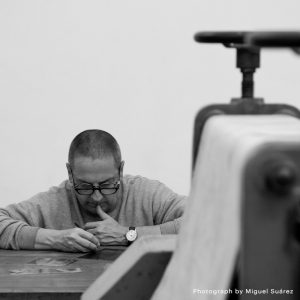 José Antonio Suárez Londoño is a Colombian artist whose unique, and even idiosyncratic, practice has seen him celebrated by museums, artists and authors alike. Using notebooks and other assorted pieces of paper as his support, mainly working in his native Medellín, Suárez Londoño creates prints and drawings whose vivid images are filled with poetry and observation. These are made daily, the result of an extraordinary self-discipline, meaning that while each individual drawing is an intimate gem in its own right, it also serves as a part of an incredible over-arching and open-ended narrative. They are each instalments, yet viewed together can be seen as parts of one vast work of art. The pictures of Suárez Londoño are filled with a dazzling variety as the viewer is plunged into a rich realm of visual references that owe themselves to cues from the constant flow of life, literature, thoughts and current affairs. It was this quality in Suárez Londoño’s works that saw him included in the Giardini exhibition, The Encyclopedic Palace, curated by Massimiliano Gioni, which lay at the heart of the 2013 Venice Biennale. José Antonio Suárez Londoño’s works have also been shown at the Museum Villa Stuck, Munich, at the XXIV and XXXII Bienal São Paulo, the Museum of Modern Art, New York and the Museo Reina Sofia, Madrid, among others. His works are held in collections including MoMA, the Metropolitan Museum, New York, and the Graphische Sammlung Albertina, Vienna.

Suárez Londoño is often portrayed as a modern-day hermit: he does not use mobile phones or computers, but is resolutely analogue. However, his social circle and his long history of travel belie this impression. He travels often, especially to the United States, and devours museums wherever he goes, fuelling his rich visual erudition. Suárez Londoño began studying biology at Medellín’s Universidad de Antioquia before abandoning the subject to become an artist, later attending the École supérieure d’art visuel in Geneva. Nonetheless, an interest in biology can often be traced in his pictures, which frequently contain anatomical imagery as well as other elements such as the patterns of leaves and the shapes of trees. At the same time, Suárez Londoño became highly skilled in many of the processes surrounding printmaking, an area which continues to fascinate him. His works contain a bewildering variety of techniques, with the imagery ranging from near-abstract patterns, often taken from nature, to intensely observed portraits. The general stream of life appears to make itself apparentin this constant, lyrical cascade of pictures. In this way, he adheres to his personal credo: ‘always do the same thing, and always do it differently.’

This ties into his fascination with time, which is central to Suárez Londoño’s work. There is an element of ritual to his drawings, with echoes of the liturgical calendar transposed into his own universe. On Fridays, he will draw portraits of and with a group of colleagues in Medellín, now known as ‘Taller 7’; in this way, he helps to promote the discipline of drawing, a tradition all too often overlooked in contemporary art. On the 19th of each month, he will draw Edgar Degas, one of his greatest artistic heroes, who was born on 19 July 1834. And he will also create his ‘Yearbooks’, recording his daily responses to the books he reads. This practice began in 1997 when Suárez Londoño read and illustrated Brian Eno’s book A Year with Swollen Appendices, published the previous year. Since then, he has filled notebook upon notebook with his daily responses to writings as diverse as those of Paul Klee, Franz Kafka and Patti Smith; his three notebooks dedicated to Ovid’s Metamorphosesare held by the Museum of Modern Art, New York. This practice, combined with the rest of his oeuvre, sees Suárez Londoño constructing an ever-shifting, deliberately subjective system by which to interpret, experience and record his own personal universe. While his pictures and annotations anchor each work in the precise moment—historical and personal—in which it was made, this adds to the sense of their being part of an almost timeless, endless tide of creativity 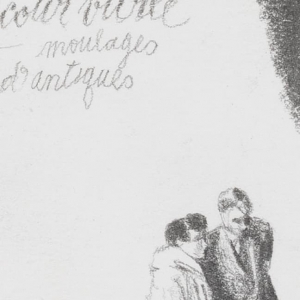 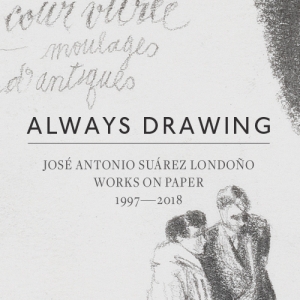