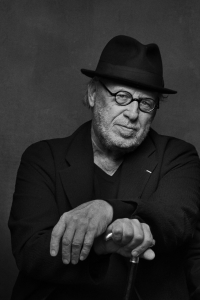 Joseph Kosuth is a leading exponent of conceptual art, whose unique practice centres on the role of language and meaning. Born in Toledo, Ohio, in 1945, Kosuth began studying art from a very young age. In addition to private tutorship from the Belgian painter Line Bloom Draper during the mid 1950s, Kosuth attended the Toledo Museum School of Design from 1955 to 1962, then the Cleveland Institute of Art from 1963 to 1964, where he first met the abstract painter Ad Reinhardt. The elder painter’s ideas aligned with Kosuth’s burgeoning interest in philosophy, which prompted him to abandon painting for an exploratory approach that posited art should be viewed as an intellectual activity.

In 1965, Kosuth moved to New York to study at the School of Visual Arts. That same year he read Wittgenstein’s Tractatus Logico-Philosophicus and embarked on a series of works that placed a provocative emphasis on the tautological. He started with Leaning Glass, which consisted of any five-foot square sheet of glass that could be leant against any wall, and from there came works such as One and Three Chairs, 1965, Museum of Modern Art, New York, which famously represents one chair in three ways: as a manufactured chair, as a photograph, and a photostat print of a dictionary definition of the word ‘chair’. The ‘One and Three’series – with later iterations presenting other ordinary objects, such as a stool, clock and snow shovel – investigates the relationships between ideas, words and images, or sign, signifier and signified, to highlight the linguistic nature of all art propositions. Such works, along with Kosuth’s pioneering use of neon, immediately sparked debate in New York’s art world as they overtly rejected the brand of formalist modernism popularised by the art critic Clement Greenberg.

In 1969, Kosuth published his enormously influential essay ‘Art After Philosophy’ in Studio International, in which he declared, ‘The “value” of particular artists after Duchamp can be weighed according to how much they questioned the nature of art’. The text set forth a theoretical framework for his career, whereby attention is turned away from the aesthetic value of objects, with ‘art’ understood as a producer of meaning, a part of the history of ideas. In the early 1970s Kosuth studied anthropology and philosophy at the New School for Social Research and in 1974 – aged 28 – he held his first retrospective exhibition, at the Musée d’Art Moderne de la Ville de Paris. During this period he was also a member of the temporarily transatlantic Art & Language collective, and editor of their eponymous journal.

Kosuth’s writing and teaching activities are arguably as important to the definition and cementing of conceptual art as are the physical manifestations of his work. He has been a visiting professor at various institutions, including the Staatliche Akademie der Bildende Künste in Stuttgart, Yale University, Pratt Institute and Oxford University. He has also received numerous site-specific public commissions, where context becomes content, including a giant replica of the Rosetta Stone in the French town of Figeac, near the home of the renowned Egyptologist Jean-François Champollion. Following this work, Kosuth was honoured by the French government with a knighthood. In 2003 he received the Decoration of Honour in Gold – the Austrian Republic’s highest honour for accomplishments in science and culture – for his role in establishing The Foundation for the Arts as part of The Sigmund Freud Museum. Kosuth lives and works in London and New York and continues to exhibit and lecture widely.