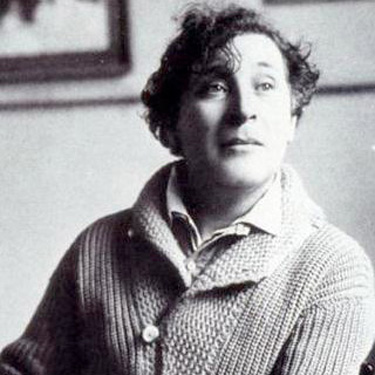 Marc Chagall’s pictures plunge the viewer into a heady and intoxicating world filled with colour, magic and lyricism. His works have a Surreal flavour, with mysterious hybrid animals and floating lovers often populating the skies above dream-like renderings of places such as Vitebsk, Paris and Vence. His pictures are now found in museums throughout the world, including several dedicated to the artist alone, for instance in his native Vitebsk and in Nice.

Chagall was born in the years of the Russian Empire in Vitebsk, which now forms part of Belarus. He grew up in a childhood infused with the magic of the warm, vibrant Jewish community there. Despite the challenges posed by the state in those days for a young Jewish man seeking to become an artist, Chagall managed to find his way to studying in St Petersburg. He then went to Paris, where he became one of the group of artists based in the legendary building, La Ruche, which was also home to artists including Amedeo Modigliani and Chaïm Soutine. His increasingly fantastical pictures began to garner a significant and supportive following during this time; they often fused a number of avant garde elements, presenting fragmented forms through the use of facets of colour that themselves echoed those of Cubism, yet which had been introduced by Chagall for more evocative purposes.

Chagall returned to Vitebsk in 1914, partly in order to marry Bella Rosenfeld, a girl from a good family whom he had met before his departure for Paris. He now hoped to secure her hand, despite being a relatively poor prospect in the eyes of his future parents-in-law. What was meant to be a short trip was prolonged by the outbreak of the First World War, which saw him essentially stuck in Russia. He married Bella; with the Russian Revolution, he also became the founder of an art school in Vitebsk, which also hired El Lissitzky and Kasimir Malevich as teachers. While Chagall’s own work from this period had a more rigorous structure than some of his earlier, whimsical images, he was nonetheless out of step with the mood of the time, and was soon ousted from his position, as students and teachers alike preferred the Suprematist aesthetic.

In the early 1920s, he and Bella returned to France with their daughter Ida. He was now an internationally recognised artist and managed to travel widely, even visiting Palestine. This re-engaged him with his sense of Jewish identity, as did his increasing awareness of the privations and humiliations suffered by the Jews under the rule of the Nazis. Sometimes, the sense of romance in his works had been tempered either by nostalgia; now, in addition, outright indignation came to the fore as he protested against the inhuman treatment of people.

Chagall became a French citizen in 1937, but this stood him in no great stead following the Occupation of France and the foundation of the Vichy-administered state in the South. Eventually, he managed to secure passage to the United States. There, towards the end of the Second World War, Bella died suddenly and unexpectedly, shattering some of his world view. Some years later, he was introduced to another woman, Valentina Brodsky, or ‘Vava’, whom he would marry in 1952 and with whom he would live out the rest of his days.

Returning to post-war France, Chagall set up his home in the South; many of his works became infused with rich sense of light and colour from that area. The luminosity of his works was enhanced when he became involved in projects for stained glass windows, many of which are now still in situ in churches, synagogues and cathedrals in many nations. During this time, the theme of lovers, often tinted with loss, remained at the forefront of his work; at the same time, flowers and the circus also played their parts, enhancing the zest and colour of his compositions. For Chagall, the theme of humanity, or rather of love, underpinned everything.