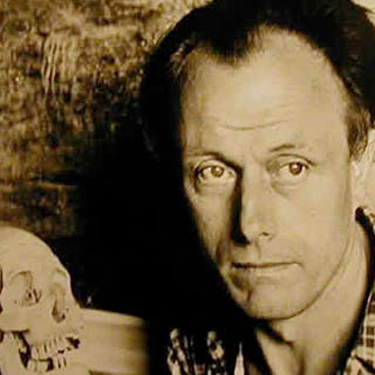 Paul Delvaux is one of the greatest artists associated with Surrealism, although he maintained a distance from the group both in its home, France, and in his native Belgium. His pictures eschew the mining of the subconscious so beloved by many of his contemporaries; instead, they reveal a parallel universe, filled with ritual and mystery, existing alongside our own. Trams trundle past antique buildings, women who appear somnambulant adopt hieratic postures, bowler-hatted men hurry past skeletons… Delvaux created a vivid and haunting oneiric realm that was distinctly his own, that was timeless and placeless, and yet which was distinctly flavoured by the Belgium in which he lived. Belgium’s St.-Idesbald is now the home of a museum dedicated to Delvaux and his works.

Delvaux was born into a wealthy family. He became interested in art and painted in a variety of styles before a number of revelations pushed him towards the idiosyncratic images that are so instantly recognisable today. One of the revelations was the work of Giorgio de Chirico, the great proponent of Pittura Metafisica. In particular, Delvaux saw his work, Mystère et mélancolie d’une rue of 1914, in which a girl was seen playing with a hoop in a static, hauntingly empty plaza of the past. The mysterious juxtapositions of De Chirico’s works opened a new world of possibilities to Delvaux, who embarked upon his own paintings in which different eras appeared conflated. Often in his works, the figures appeared to be participants in arcane religious processions.

Another key revelation was the Grand Musée anatomique ethnologique du Dr P. Spitzner, which Delvaux had visited a little earlier, in 1929, and which also had a profound impact on his works. The centrepiece of the show was an automaton resembling the sleeping Venus, which seemed to breathe, and which could be seen in the midst of a horde of seedy displays and entertainments. This contrast, and the ambiguity of this life-like, breathing yet artificial figure, had a lasting influence on Delvaux’ own works. The theme of the sleeping Venus became vital, resulting in pictures such as the one now owned by Tate, London. Their inherent enigmatic core also strengthened his loose bonds to the Surrealists, alongside whose works his own were sometimes exhibited.

Delvaux stayed in Belgium during the Second World War, continuing to paint. Indeed, the anxiety of the war and the Occupation appears to have filtered into his work. Later, travel and other influences came to affect the atmosphere of his paintings, but never disrupted the essential mystery of their content. Delvaux lived an impressively long life, and was seen as one of the statesmen of Surrealism, despite not being formally affiliated with the movement. Indeed, alongside René Magritte, he was seen as one of the two greatest Belgian Surrealists.