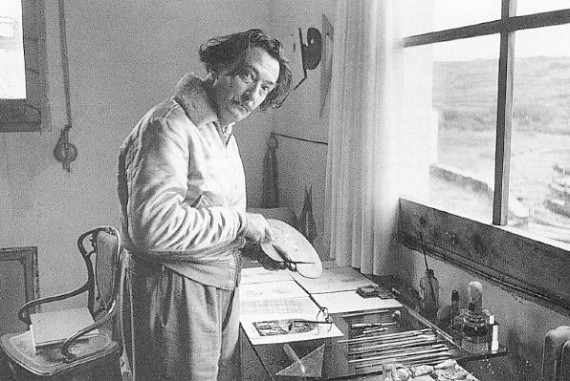 Salvador Dalí was one of the great artistic provocateurs and personalities of the 20th century. He was associated with Surrealism, having joined André Breton’s group towards the end of the 1920s, yet spent much of his career garnering his own fanatical, almost cultish following thanks to his idiosyncratic image-making and his intense charisma.

Dalí was born in Catalonia and named after his brother, who had died nine months before his own birth. Because of this, he was told that he was the reincarnation of his brother, and this sense of complex identity was to remain with him throughout his life. Indeed, he would paint works such as Portrait of My Late Brother well into the latter part of his life.

Dalí studied at the Real Academia de Bellas Artes de San Fernando in Madrid, where he became friends with Luis Buñuel and Federico Garcia Lorca. The trio became prominent in conservative Madrid for their bohemian antics. Dalí had already developed a wardrobe that earned him attention; sometimes the three would go out without wearing hats, which in those days was itself deemed an eccentricity.

Dalí was expelled from the Academia, but had already gained enough artistic attention to allow him to continue in his vocation; indeed, the expulsion arguably lent him more momentum in his pioneering discoveries, as he began to experiment with avant garde developments from elsewhere, filtering through such influences as Cubism and Pittura Metafisica. During the second half of the 1920s, he began to travel to Paris, where his works caught the attention of the Surrealists, not least the film he created with Buñuel, Un chien andalou, which featured iconic images such as a dead donkey on a piano and a woman whose eye is sliced with a razor blade – an effect actually achieved with a cow’s eye and which left the two filmmakers sickened for a long time afterwards. Another motif in the film, swarming ants, was one that would be revived and reprised throughout much of Dalí’s career in the hordes of insects he sometimes depicted.

Dalí brought new life and verve to the Surrealist group, especially through his ‘Paranoiac-Critical’ method of picture-making. In this, he took the loose, subjective associations prompted by the elements of the world around him and channelled them into his pictures, creating a universe of fluid meaning that forced the viewer to wonder what was real, and to interrogate the nature of reality. He brought a painstaking attention to detail and a jewel-like finish to his works, adding to their visual impact. This would result in masterpieces such as Le jeu lugubre of 1929, La persistence de la mémoire of 1931 with its iconic soft watches, or Le spectre de Vermeer de Delft, pouvant être utilisé comme table of around 1934.

Dalí’s involvement with Surrealism saw him marrying one of the great Surreal muses, Gala, who, at the time she had met him, was still the wife of Paul Eluard; she remained his muse and manager for the rest of his life. However, within a short time, Dalí was embroiled in controversy within this group. He was upbraided for making an apology on one occasion, and on another was attacked for his use of Adolf Hitler in his pictures. This was against a backdrop of the increasing drift to the left of the Surrealists. Eventually, Dalí went to New York; there, he continued making his pictures, collaborated with Disney on the planned film Destino, created set designs, portraits, clothes, furniture… he was a whirlwind of creativity. Even his moustache became iconic, instantly recognised throughout much of the world. He tended to divide his time between New York, Paris and his native Catalonia.

Edgar Degas
We use cookies on this site to enhance your experience. By continuing to use the site you are consenting to our use of cookies. OkayPrivacy Policy
Scroll to top