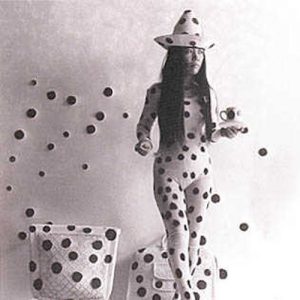 Yayoi Kusama has become one of the icons of the art world. The polka dots that feature in so many of her works have become recognised throughout a large swathe of the planet. In recent years, as well as public commissions and works in museums, she has been granted a number of monograph retrospectives, including the 2012 one held at the Centre Georges Pompidou, Paris; Tate, London, and the Whitney Museum of American Art, New York.

The fact that Kusama was shown in New York is a fascinating reflection in itself: it was there, between the late 1950s and early 1970s, that she originally emerged as an artist, gaining international prominence with her artworks and her performances. Kusama was born in Japan in 1929 and had endured the hardships of existence during the Second World War, and also as an artistically-inclined daughter in a conservative family. As a child, she had also experienced hallucinations that would play a key role in the art she later produced. In the 1950s in Japan, she began creating works that gained more and more recognition, being given a number of exhibitions there during her twenties. The works on paper she created during this period were often delicate and featured patterns that prefigured the paintings and environments that would later mark out her distinctive and immediately recognisable look.

It was in her 1959 show at the Brata Gallery in New York that she showed a group of white ‘Infinity Nets’. These were large paintings upon which Kusama had, with almost obsessional patience and application, painted a lattice-like pattern in white upon a white surface. Seen against the backdrop of the Abstract Expressionism still in its ascendance in New York, these works appeared both to extend and to disrupt the notions that underpinned the avant garde of the day. One of the many to write enthusiastically about this exhibition was Donald Judd, then working as a critic—he would later become involved with Kusama, and his own works would come to share certain characteristics with hers.

Kusama’s obsessional covering of objects and surfaces with repeated patterns, which recalled the unifying presence of the visions she had endured as a child, would inform her ‘Accumulations’ series. These works took a number of forms, for instance covering a surface with a horde of near-identical tickets or dollar bills, or adding phallic organic forms to three-dimensional objects. It was this latter technique that would feature in Aggregation: One Thousand Boats of 1963. This was an installation in which a rowing-boat was covered in these near-fungal forms; it was approached through a space itself decorated with 999 images of the boat.

In 1966, Kusama presented an unofficial entry at the Venice Biennale, Narcissus Garden. This was an accumulation of plastic glass spheres. These mirrored balls were offered for sale by a kimono-garbed Kusama at $2 apiece in a sharp critique of the Biennale and its commercial underpinnings. The exhibition was funded by one of her artist supporters and admirers, Lucio Fontana. The work created enough of a scandal that she was prohibited from selling the balls in Venice. Narcissus Garden has subsequently been recreated in museums and venues throughout the world.

Kusama also began to carry out happenings, many of which involved nudity. These gained more and more press attention, culminating in her occupation of the gardens at the Museum of Modern Art, where her naked colleagues draped themselves on some of the sculptures exhibited. Many of these ‘Body Festivals’ had additional relevance through their status as protests against the Vietnam War.

Kusama returned to Japan in 1970, moving there decisively shortly afterwards. For some time, she began to focus on literature rather than art, before returning with aplomb some years later. In the meantime, she had checked in voluntarily to the Seiwa Hospital for help with the neuroses that had caused her hallucinations, and for which her artworks have always been a form of therapeutic disassociation. It is because of this highly personalised source of her work that Kusama eschews all the labels and associations which are pinned on her: Surrealism, Abstract Expressionism, Minimalism, Feminism and Pop have all been suggested as pigeonholes for her art, or movements partially inspired by it. This has been fuelled by her friendships and relationships with characters as wide-ranging as Georgia O’Keeffe, Joseph Cornell, Donald Judd and Claes Oldenburg. However, her art springs from the well of her own psyche, and is all the more distinctive for it.

Kusama has long created environments that are filled with the repeated polka dots of her hallucinations. Indeed, in 1960s New York, this led to her being nick-named ‘Dotty.’ In addition, in the mid-1960s, Kusama began to use mirrors to create reflective environments in which patterns would proliferate to an apparent infinity, often adding a cosmic, hallucinatory and immersive dimension to her works. In recent years, these have garnered much attention in their own right.