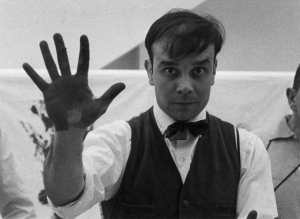 Blazing a unique trail through the art firmament, Yves Klein was a paradox: perfectionist, prankster and high priest. Whether he was painting a canvas a monochrome blue, throwing gold leaf into the Seine or watching while naked models pressed their colour-soaked bodies against a picture surface, he walked a delicate line between innovation and provocation. He would keep his sense of humour and wry smile in his arsenal while pontificating on the role of colour, on the nature of the void, or on the potential for a blue nuclear explosion. His ideas were grandiose, his influence lasting. Museums throughout the world hold works by Klein, and retrospectives have been held on numerous occasions since his untimely death in 1962, at the age of only thirty-four, reflecting the intense impact that his short career had on the entire landscape of contemporary art. Photographs of Klein wielding a flame-thrower, dragging naked women across a floor, emptying a gallery space or leaping from a French building, remain iconic to this day. They also reflect the importance of Klein’s actions and persona to his entire artistic practice, a performative approach that still retains a strong currency.

Klein was born to parents who were both artists: his father painted landscapes in a post-Impressionist manner, while his mother created abstract works. Klein would push the barrier of abstraction further than his mother, beginning to toy with the idea of monochrome pictures as early as his late teens. During this period, he became friends with Arman and Claude Pascal, forming a triumvirate that became crucially important to his artistic development.

Klein believed in the importance of physicality and ritual, and became obsessed with judo. He even travelled to Japan to achieve the fourth dan of the black belt, so that he could become a respected teacher in Europe. His plans did not work out, yet the importance of his time in Japan and his interest in judo would combine with his Rosicrucianism and artistic developments to push him towards creating his spiritual yet provocative art works, including his early monochromes. In 1955, Klein submitted one of these monochromes to the Salon des Réalités Nouvelles, which rejected it, insisting that even an abstract painting had to have two colours. Klein arranged for friends to wander around the exhibition muttering and complaining about his exclusion.

When Klein began to create his monochromes, he employed a variety of colours, eventually paring his palette back to three: gold, pink and his own, patented IKB, or International Klein Blue. This was a colour invented in collaboration with Édouard Adam, in which ultramarine pigment was suspended in resin, appearing unmuted and intense. These monochromes became shimmering slivers of the Immaterial for Klein. Explaining the rigour of his monochromes, Klein said: ‘It is colour which bathes in cosmic sensibility. The line does not have the ability to impregnate, as colour does. The line cuts space… Colour impregnates it. Line rushes through infinity; colour just “is” in infinity.’ When Lucio Fontana saw these works displayed at the Proposte monochrome, epoca blu exhibition in Milan in 1957, he acquired one, beginning an important friendship between the two. Klein would also become friends with a range of other artists, from Jean Tinguely to Ed Kienholz, a testament to the power and persuasiveness of his vision.

The monochromes and IKB provided springboards for a number of artistic developments: Klein would turn to naked models for his Anthropométries, presiding in a tuxedo while they were daubed in paint and rolled on or pressed against various surfaces; he turned to sponges for his RE series, which culminated in the monumental murals for the Gelsenkirchen opera house; and to fire, both for his fire paintings and his walls of flame. He was a constant innovator, in the techniques he employed, the media he used and the rituals that so often provided context to his works. In a sense, these culminated in his marriage, in the uniform of an archer of the Order of the Archers of Saint Sebastian, to Rotraut Uecker, the year before his death.