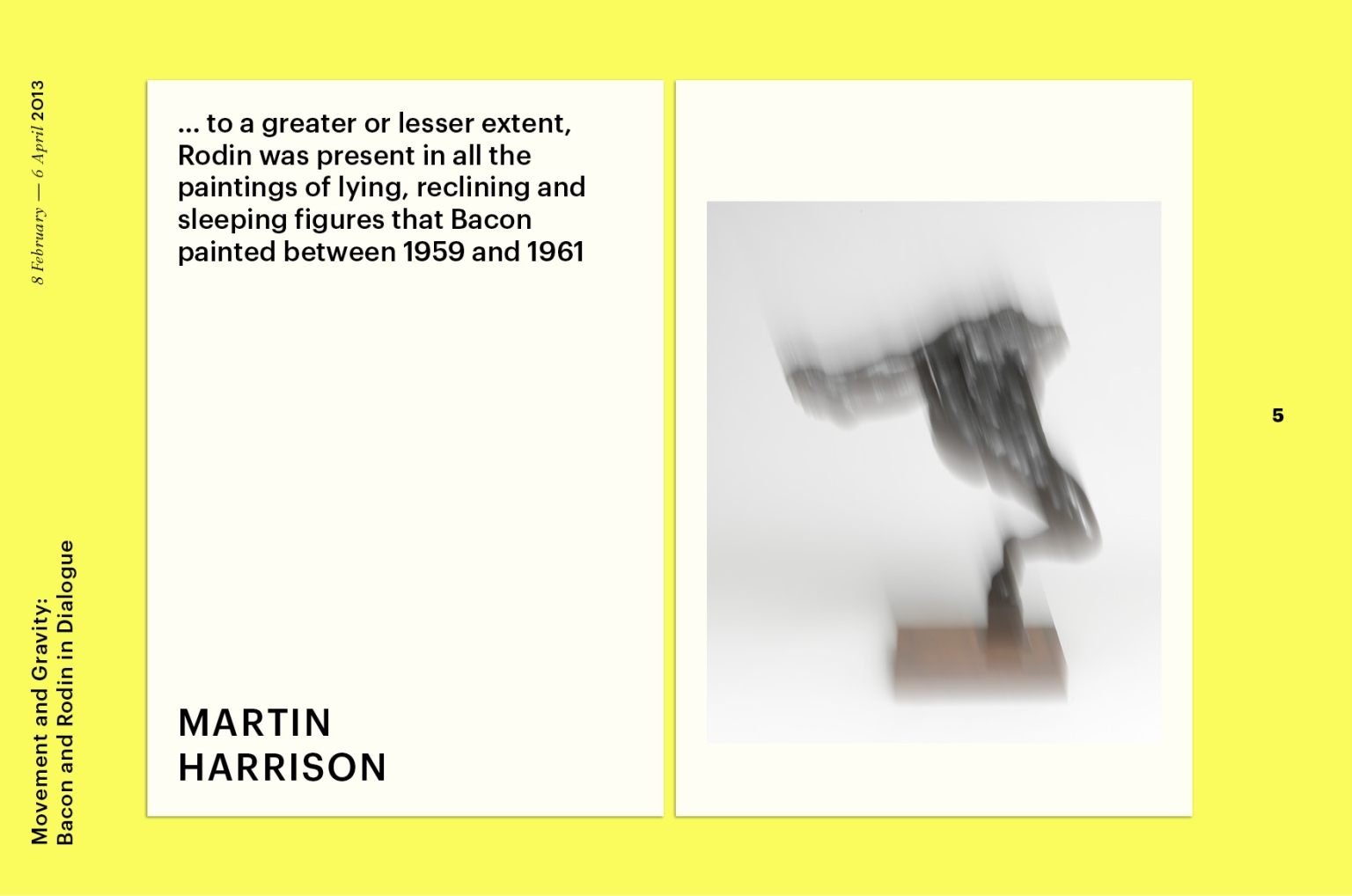 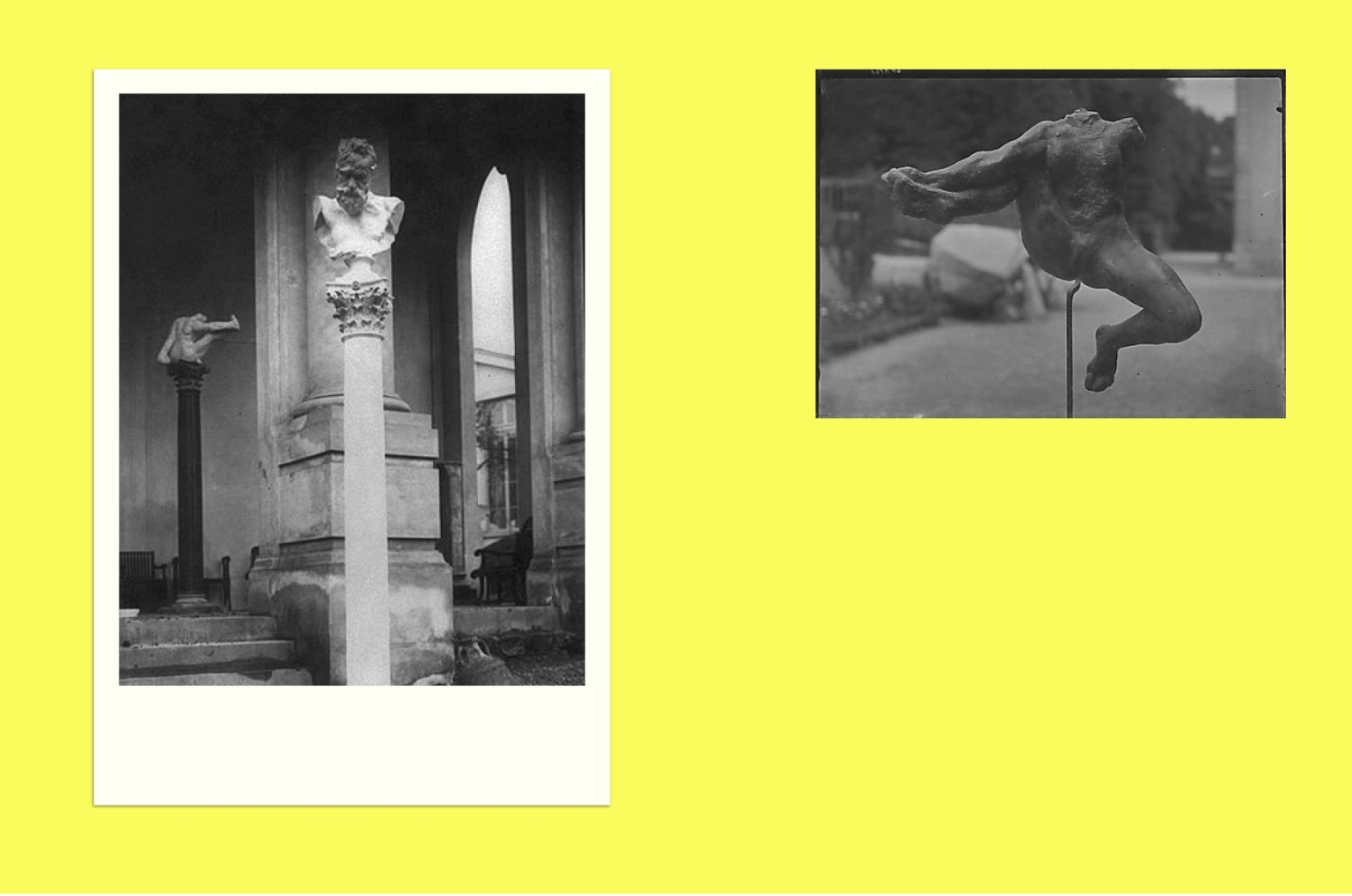 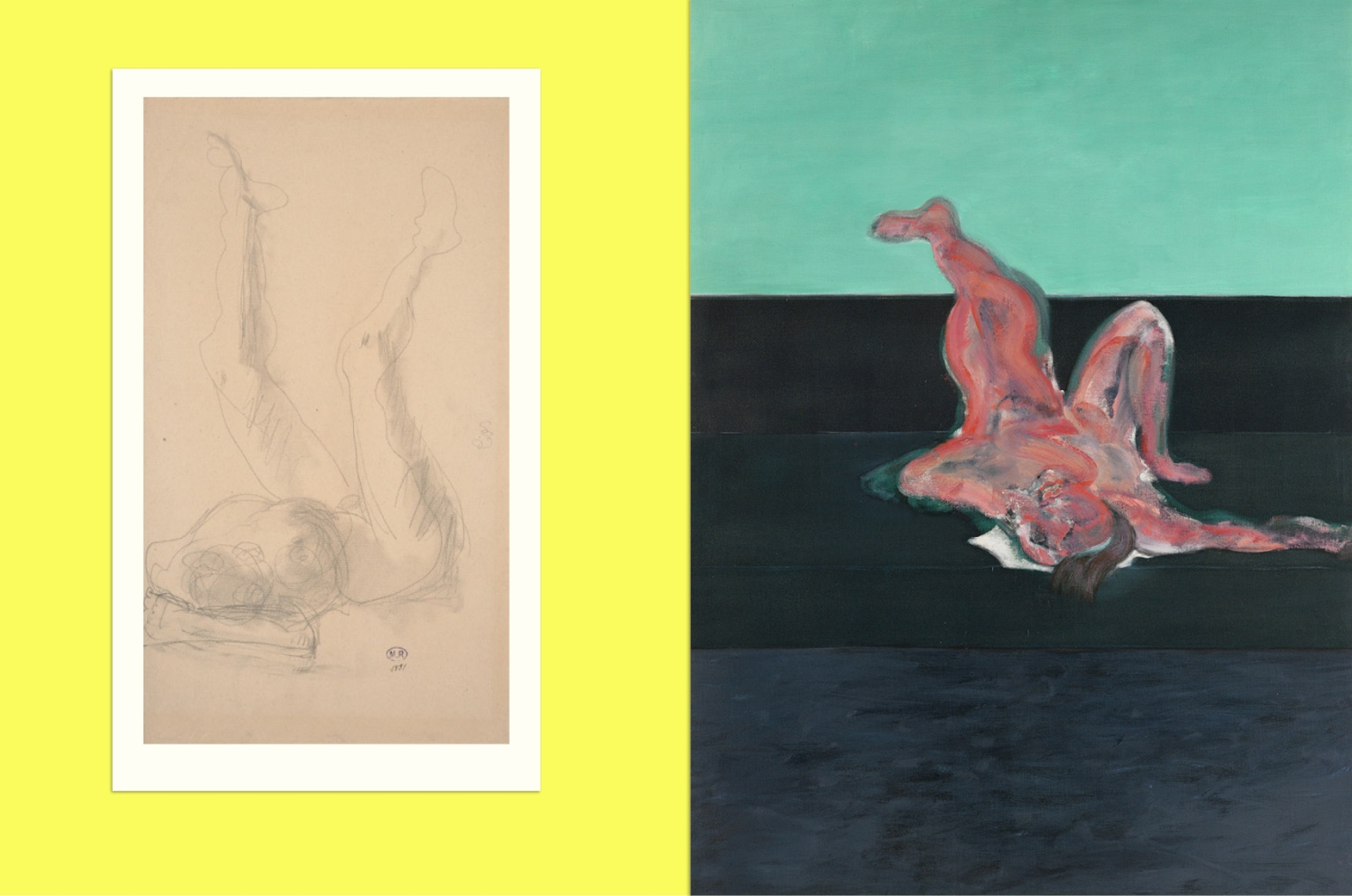 At the beginning of September 1959, Francis Bacon travelled to Cornwall, seeking to escape the distractions of London, and took out a six-month rental on a studio in St Ives from the artists William Redgrave and Peter Lanyon. One evening at a party in St Ives, Redgrave noticed Bacon talking with Brian Wall; Bacon asked Wall what he did. ‘I’m a sculptor’, replied Wall; ‘How interesting’, Bacon retorted, before continuing, ‘actually there are only three: Michelangelo, Rodin and Brancusi.’ This provocative response not only confirms Bacon’s high estimation of Rodin, but also coincides exactly with the period in which Rodin’s sculpture was paradigmatic in his paintings. For Bacon, Rodin’s dialogue with the human body, exaggerated limbs, fractured forms and the articulation of movement was of vital importance to his work in the 1950s and 1960s, but this is a topic that has attracted little comment, until now.

Movement and Gravity: Bacon and Rodin in dialogue was the first exhibition ever dedicated to exploring the dialogue and connections between Francis Bacon and Auguste Rodin, and examined the profound effect of Rodin on Bacon’s work, in particular, the modulation of the figure and the portrayal of movement and the body in space. Bacon’s interest in Rodin was documented as early as 1950; a reproduction of Le Penseur, 1880, was included among a selection of Bacon’s pictorial sources at his Cromwell Place studio by photographer Sam Hunter. In 1953, Roland, Browse & Delbanco Gallery in Cork Street staged its first exhibition of Rodin’s work in London and it is very probable that Bacon would have viewed drawings and bronzes there throughout the 1950s, especially as the gallery was a stone’s throw from Marlborough Fine Art who represented Bacon. However, Bacon would have been familiar with the work of Rodin since the mid-1920s when he moved to London; he seldom lived more than a few minutes’ walk from the Victoria and Albert Museum, where his uncle, Sir Cecil Harcourt-Smith, had been Director. The Victoria and Albert Museum held Rodin’s most extensive collection of works in England: eighteen sculptures gifted to the museum by Rodin in 1914, to which Bacon is said to have been a frequent visitor. In the 1960s Bacon became closely acquainted with several sculptures that his friend Lucian Freud had borrowed, including the three versions of Iris shown in this exhibition.

Three bronzes by Rodin were shown alongside three paintings by Bacon, including Three Studies from the Human Body, 1967, which had never before been publicly displayed in the UK. The exhibition catalogue included an essay by Martin Harrison, editor of the Francis Bacon Catalogue Raisonné. A special performance by choreographer Joe Moran, responding to the themes and works presented in this show, was staged to the public during the exhibition.