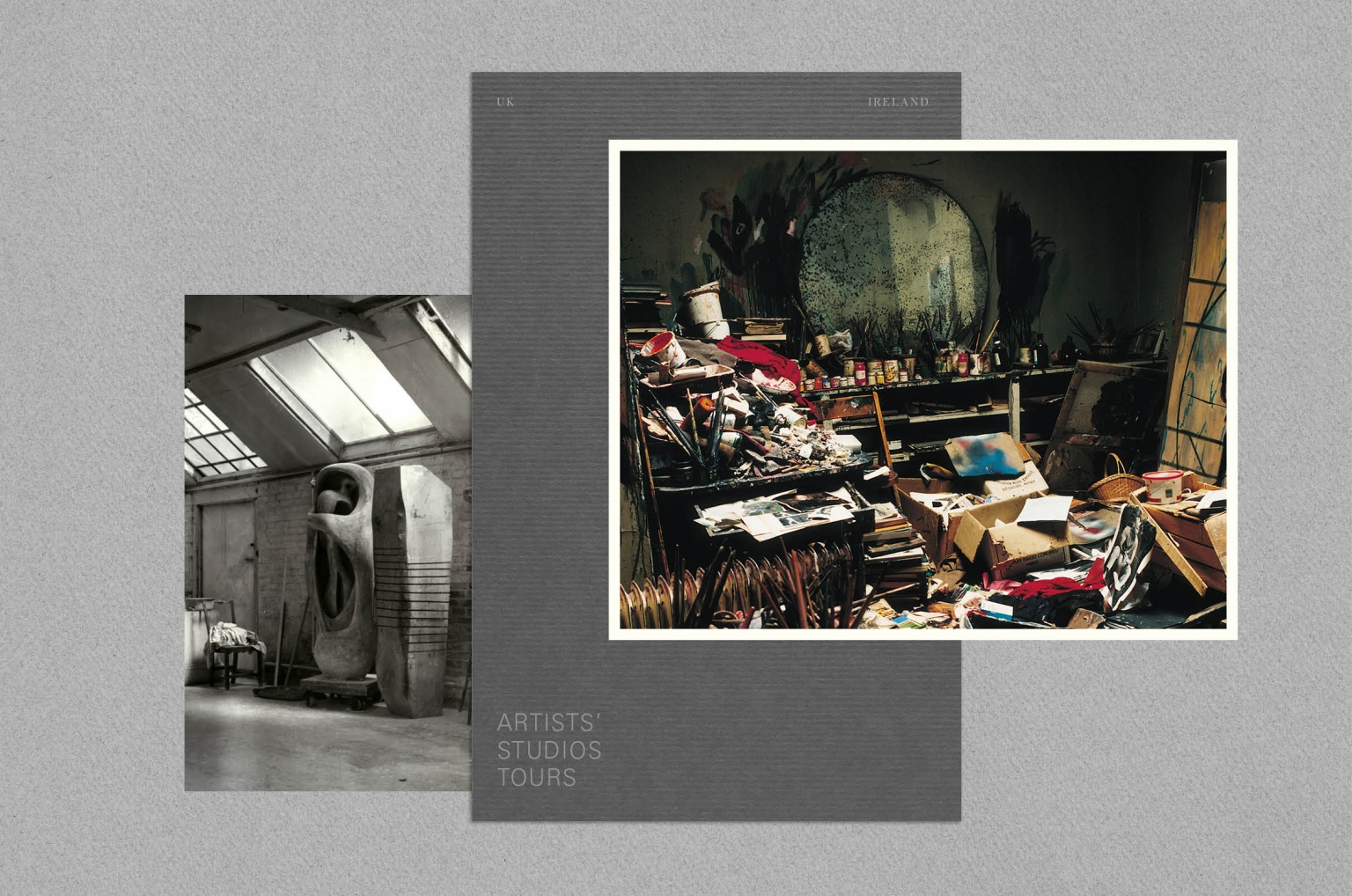 In the spirit of The Artist’s Room, which invites you into a fictional artist’s space, we present a list of some of the best artist’s studios to visit in the UK and Ireland. From Barbara Hepworth’s immaculately preserved studio in St. Ives to the fantastical Leighton House in London, we hope visiting them will teach you more about these inspiring artists and spark your own creativity.

Barbara Hepworth first came to St Ives with her family at the outbreak of war in 1939. She returned in 1949 and never left, living and working at Trewyn Studio until her tragic death in 1975 in an accidental studio fire. It was Hepworth’s wish that, after her death, the property be preserved as a gallery dedicated to her work, and in 1980 Trewyn and many of the artworks within it were given to the nation and placed in the care of the Tate Gallery. The site remains true to the artist’s wishes, with many of the sculptures on display throughout the grounds in the same position that Hepworth originally placed them, and the studio filled with her tools and unfinished works. The museum is also home to paintings, drawings, and archives.

Ground-breaking British painter Francis Bacon lived and worked at 7 Reece Mews, South Kensington for the last thirty years of his life. Apart from the studio the space consisted of two rooms: a kitchen with a bath, and a living room that doubled as the bedroom. After the artist’s death on April 28, 1992, the studio was left exactly as it had been, a chaos of canvas, paint, cloth, brushes, champagne boxes and a large mirror. In 1998, the artist’s heir and executor donated the studio’s contents to the Hugh Lane Gallery in Dublin, Bacon’s birthplace. A team of archaeologists, conservators and curators painstakingly surveyed the space, mapping out the locations of objects that were meticulously tagged and packed, including the walls, door, floor, ceiling and specks of dust; each item was logged in the Francis Bacon Studio Database. The relocated studio opened to the public in 2001.

Sculptor Henry Moore and his family moved to this former farmhouse in 1940 after his London home suffered bomb damage, and remained until his death in 1986. Hoglands, as it was called, offered a large garden and a series of outbuildings perfect for conversion into studios. Acquired by The Henry Moore Foundation from Moore’s daughter in 2004, the house and studios opened in 2007 after careful restorations and includes Moore’s personal collection of artefacts, books, and works of art from Moore’s early career and from famous artists including Picasso, Modigliani, Hepworth, Michelangelo, and Rembrandt.

This home belonged to artist, craftsman and writer William Morris, founder of the Arts and Crafts movement. Designed by Morris’ close friend, the English architect Philip Webb, it was completed in 1860. The home gives a unique view into Morris’ early designs and colour schemes through the original features and furniture by Morris and Webb, as well as stained glass and paintings by the Pre-Raphaelite artist Edward Burne-Jones. It was while living at Red House that Morris co-founded Morris, Marshall, Faulkner & Co., which later became Morris & Co., the furnishings and decorative arts manufacturer that released his now-iconic floral repeating patterns. Morris only lived at Red House for five years due to deteriorating health, and it passed through several hands before being anonymously purchased and donated to the National Trust, who are still uncovering original features and artworks.

The pioneering British photographer Julia Margaret Cameron lived and worked in this house on the Isle of Wight, named after the family’s tea and coffee plantations in Dimbula, Sri Lanka, from 1860 to 1875. The home became an important meeting place for the Freshwater Circle, a group of bohemian artists and writers, among them Alfred Lord Tennyson and Lewis Carroll. The museum has preserved many of the original features of the home, included Gothic carvings, William Morris wallpaper, a stairway and Victorian glass designed by Cameron, and a recreation of her bedroom. It is also home to many of Cameron’s celebrated photographs and hosts contemporary photography exhibitions.

Before JMW Turner became one of Britain’s most celebrated landscape painters he trained as an architectural draughtsman and, in 1812, designed his own home, Sandycombe Lodge. He spent weekends at the Twickenham home until he sold it in 1826, after which it had many different owners, and was almost demolished after being used as a factory during the Second World War. Today the house is owned by the Turner’s House Trust and is open to the public, having been restored as closely as possible to its original design.

This picturesque sixteenth century house was purchased by the parents of the famous British painter Thomas Gainsborough for £230 in 1722. The artist spent his childhood there and returned to live in the house after his father’s death. Gainsborough’s House Society purchased the house as a monument to the artist’s life and work, and it opened as a museum in 1961, showcasing Gainsborough’s works, as well as eighteenth century furniture and memorabilia. Exhibitions of British and contemporary art are also staged throughout the year, and the property includes a garden solely comprised of plants that were available during the artist’s lifetime.

The painter, printmaker, satirist and editorial cartoonist William Hogarth purchased this home in 1749 as a country retreat, where he lived with his wife and several family members until his death in 1764. The home opened to visitors in 1904, giving a chance to see Hogarth’s ‘painting room’, which he used until a few days before his death, along with a comprehensive collection of his prints and a set of his engraving plates.

Leighton House is the former the home of nineteenth-century English painter and draughtsman Frederic, Lord Leighton, and is the only purpose-built studio-house currently open to the public in the UK. Begun in 1856, the home was intended to serve as a private palace filled with Leighton’s own artworks, as well as pieces by his contemporaries, and he extended and embellished it several times over the next thirty years. The most spectacular addition, the gold-domed Arab Hall, was inspired by a Moorish palace in Southern Italy and was built to house Leighton’s collection of Middle Eastern tiles. Today, the house has been restored, with many of his paintings, collections and personal belongings tracked down and either purchased or loaned back to the museum.

This farmhouse in Sussex was home to American photographer Lee Miller and her husband, the English Surrealist painter, photographer, poet and biographer Roland Penrose. The couple moved there in 1949 after the birth of their son, and during their time there the house received visits from many notable friends and colleagues, including Pablo Picasso, Man Ray, Joan Miró and Max Ernst. Works by many of these artists are currently on display as part of a rotating permanent exhibition of Miller and Penrose’s extensive collection.

The Victorian house that was originally the home of the famed architect, designer and artist Charles Rennie Mackintosh and his wife, the artist Margaret Macdonald Mackintosh, was sadly demolished in the early 1960s, but the original fixtures and contents were painstakingly reassembled in the 80s as part of the Hunterian Art Gallery, just 100 meters away from where the original house once stood. The architects who recreated the structure paid close attention to descriptions and photographs; the main rooms flow exactly as they would have done in the original and are decorated as closely to Mackintosh’s designs as possible.