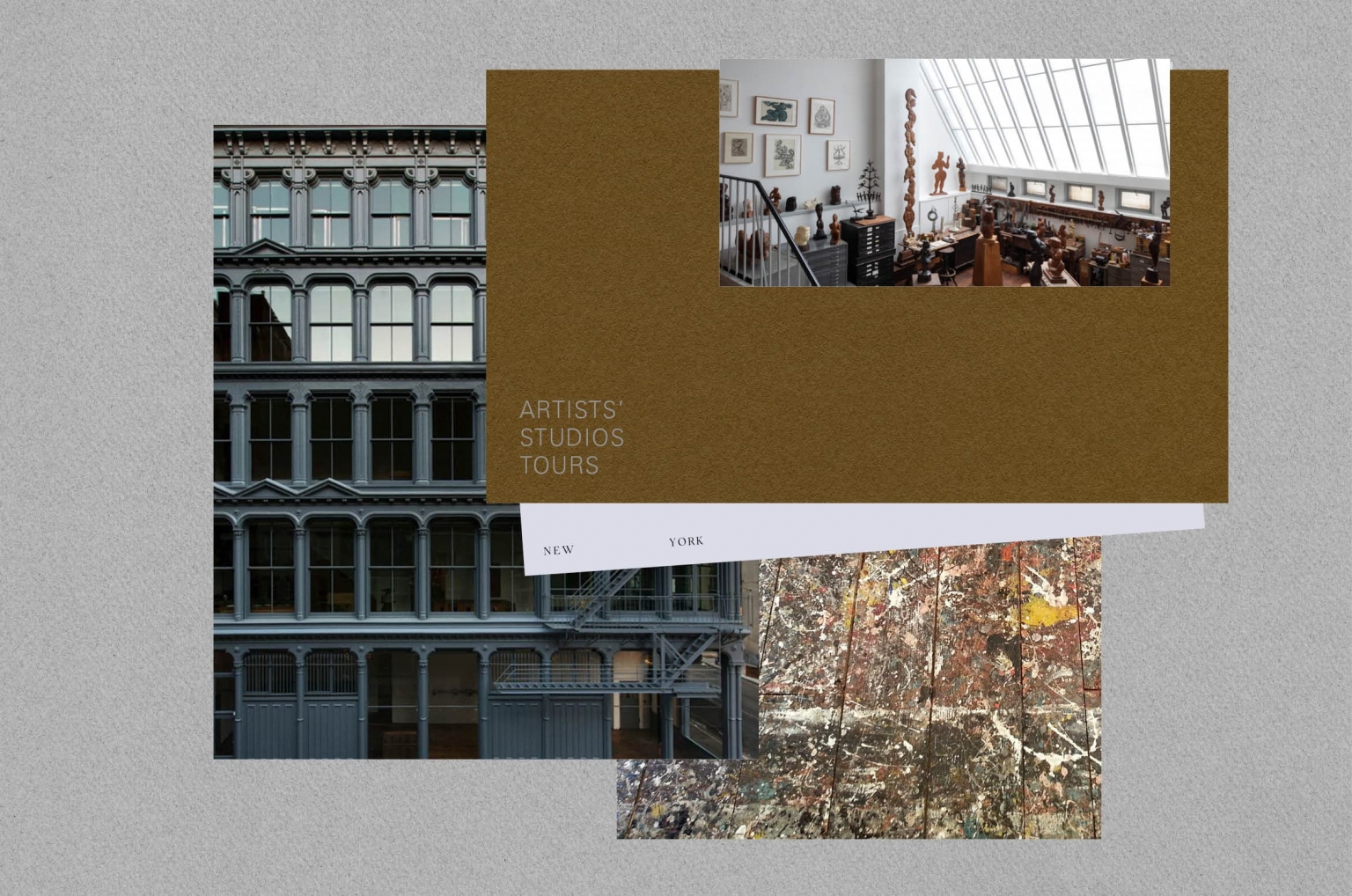 In the spirit of The Artist’s Room, which invites you into a fictional artist’s space, we present a list of some of the best artist’s studios to visit in the New York area, from Jackson Pollock and Lee Krasner’s paint-spattered studio in Long Island to the Donald Judd’s beautifully restored cast iron Soho building full of Minimalist art and furniture. We hope you will be able to visit them soon and escape into their special worlds, perhaps finding something special to bring back to yours.

Jackson Pollock and Lee Krasner purchased this home in the Long Island town of East Hampton in November 1945. Today, the house still contains all of the furnishings and objects that remained at the time of Lee Krasner’s death in 1984; Pollock’s studio in the small barn next to the house still sports a paint-spattered floor, the result of his famous poured paintings.

Minimalist artist Donald Judd bought this nineteenth century five-storey, cast-iron building in New York City in 1968 to use as his home and studio. 101 Spring Street is considered to be where Judd first developed his concept of permanent installation, centred on his belief that the placement of a work is as crucial as the work itself. His inspired installations of artworks, furniture, and decorative objects balance the historic nature of the landmark building with his personal approach to architecture and design. The space opened to the public in 2013, with art by Judd and his contemporaries installed as it was when Judd died in 1994.

Louise Bourgeois purchased this townhouse with her husband, art historian Robert Goldwater, in 1962, and Bourgeois remained there until her death. The house remains the way Bourgeois left it, with her books and magazines still on the shelves, her dress and coats in the closets. Her studio was originally confined to the basement, but eventually expanded in to the rest of the house, transforming the whole space into a work of art. The house and the townhouse next door are managed by the Easton Foundation, founded by Bourgeois in the 1980s, and should be opening to the public for tours in the near future.

The site of the first Whitney Museum was once also the studio of artist and museum founder Gertrude Vanderbilt Whitney. Now part of the New York Studio School of Drawing, Painting, and Sculpture, it was once one of several artists’ studios on MacDougal Alley, where artists in the early twentieth century transformed former stables and haylofts into light-filled workspaces.

American painter Edward Hopper lived and worked on the fourth floor of this modest nineteenth-century townhouse from 1913 until his death in 1967. Now, the building is part of New York University, but parts of the space Hopper shared with his wife, and fellow artist, Josephine, are still preserved.

Before his death in 1990, Keith Haring established the Keith Haring Foundation to manage his estate and support non-profits for children, education, and research related to AIDS. The foundation is housed in his former studio, with traces of paint and its signature chequered floor, where he worked from 1985 until 1990.

This four-storey Greenwich Village home was once the studio of the late modernist sculptor Chaim Gross. Now it displays his figurative works in wood, bronze, and stone alongside his tools and impressive art collection, featuring traditional African and Oceanic objects, as well as works by artists such as Max Ernst and Willem de Kooning. The Foundation is also host to a number of rotating exhibitions.

The Dove/Torr Cottage on the banks of Titus Mill Pond was home to Modernist artists Arthur Dove and Helen Torr from 1938 until their deaths. Originally a post office and a general store, the cottage was acquired by the Heckscher Museum of Art in 1998. The museum’s collection includes Dove’s personal art library, his paints and painting materials, examples of his earlier and later work, and about thirty of Torr’s sketches and colour studies.

Architect Philip Johnson built his Glass House in New Canaan, CT, a short journey from New York City, between 1949 and 1995. The 49-acre landscape contains fourteen separate structures, including the architect’s eponymous glass-walled home, considered one of the nation’s greatest modern architectural landmarks. Other structures feature a permanent collection of painting and sculpture by twentieth-century modern masters.

Olana was the home of Frederic Edwin Church (1826–1900), a landscape artist and central figure in the Hudson River School. The artist and his wife built the home in 1869 with the help of architect Calvert Vaux. Inspired by their recent travels in the East, the result was a mixture of Victorian architectural elements and Persian motifs, with beautiful views of the surrounding landscape.

Of course, New York City has been home to countless artists over the years, with many choosing the Lower East Side for their studios, among them Mark Rothko, Eva Hesse, Cy Twombly and Robert Rauschenberg. If you fancy a walk through this historic neighbourhood, this interactive map can help you locate the former studios of artists who once lived and worked on the famed Bowery thoroughfare.