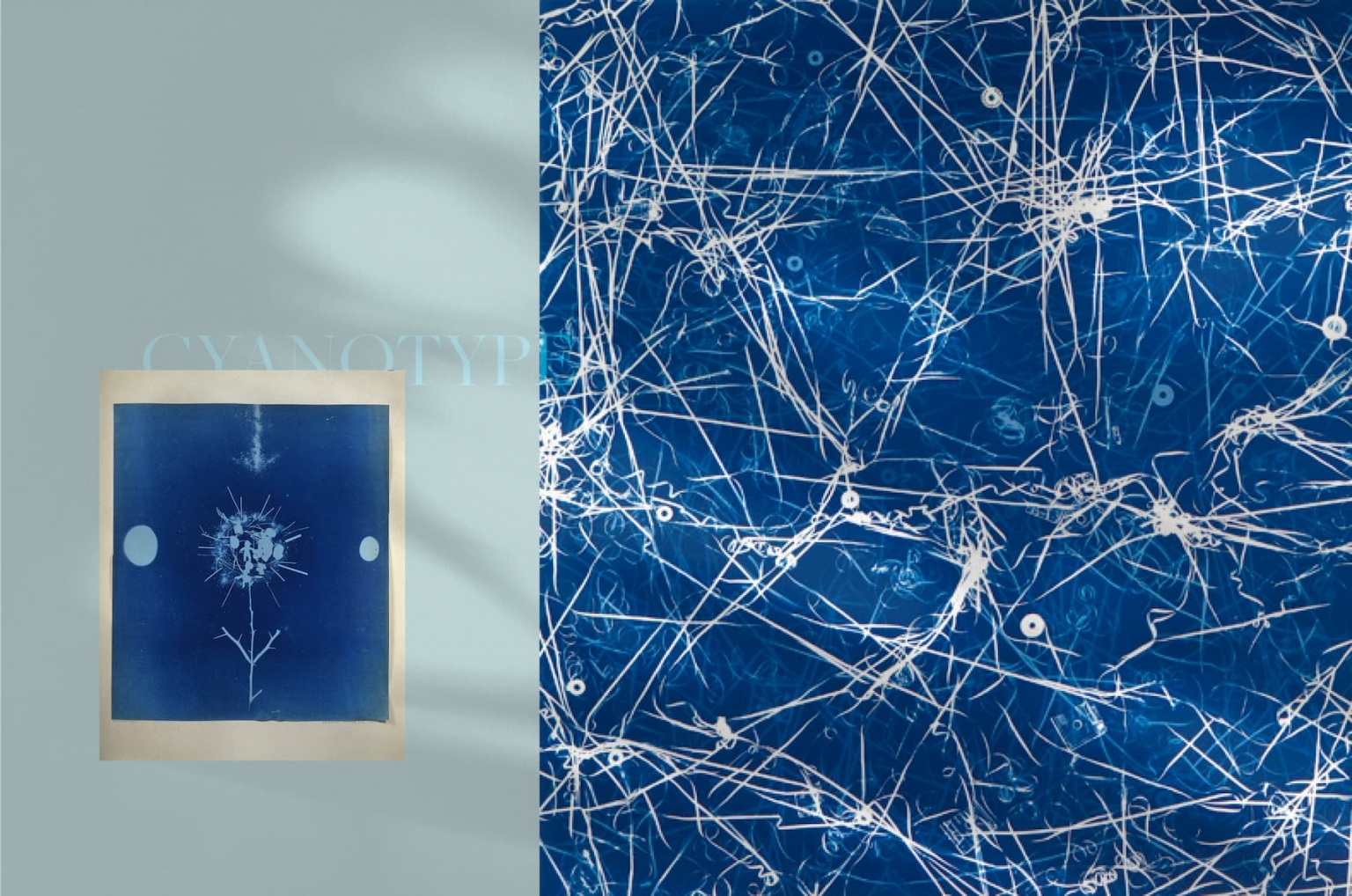 The artistic practice known as cyanography began with the invention of the cyanotype, a distinctive dark blue print, by Sir John Herschel (1792-1871) in 1842. While experimenting with the general effect of light on iron compounds, he discovered that exposure to light turned certain compounds of ferric ammonium citrate and potassium ferricyanide into Prussian blue, a beautiful shade of blue dye. By applying the compound of iron salts to a base material, such as a sheet of paper, laying a photographic negative or three-dimensional objects on top, and exposing the whole thing to light, one could create beautiful images. The light causes the desired reaction with iron in the exposed areas of the paper, turning them blue, while the rest of the sheet, obscured by whatever was placed on top, remains white. After its invention the cyanotype, or the blueprint as it is also called, was practised and perfected by a few notable photographers of the time, such as William Henry Fox Talbot (1800-1877). It was an accurate and inexpensive way to print photographic negatives, and as such it also became a kind of early version of the photocopier, allowing architectural plans and scientific documents to be reproduced easily and effectively.

Although its affordability made the cyanotype extremely popular with amateur photographers of the day, the medium was initially seen as devoid of any artistic merit. The British photographer and botanist Anna Atkins (1799-1871), a friend of Sir John Herschel’s, was one of the first to publish cyanotypes as an artist. Her book Photographs of British Algae: Cyanotype Impressions, published in 1843, is widely considered to be the first published book illustrated with photographs. The original contained over 411 cyanotypes of botanical specimens, and although the purpose was scientific in nature, the prints themselves are clearly more than just scientific records. Atkins had a careful eye for composition: pairs of specimens are carefully arranged with a sensitivity towards symmetry, while individual ribbons of seaweed undulate back and forth across the page. Her cyanotypes were photograms, i.e. they were made without a camera or negatives but rather by laying specimens directly onto the treated paper, meaning that each one had to be made individually and therefore no two copies of the book were exactly alike. This arduous enterprise took nearly a decade of work, and its realisation remains an inspiration for artists and amateurs alike.

If the artistic use of cyanotypes mostly disappeared during the early twentieth century, it gained in popularity as the 1950s and 60s saw a resurgence in amateur photographic techniques. Robert Rauschenberg (1925-2008) was introduced to the technique in 1949 by his then-wife Susan Weil, who had learned the process from family members as a child, and together they embarked on a series of works made in their small New York City apartment. The process allowed them to cheaply make works that competed with the scale of contemporary paintings, a ten-yard roll of paper costing $1.75 at the time, and existing works from the series measure anywhere from five to almost nine feet tall. Though Rauschenberg eventually moved on to other media, small examples of cyanotypes appear in some of his later combines, and elements of the method can be seen in other aspects of his practice, such as shifting the orientation of the picture plane, the use of everyday objects, and a one-to-one scale. In 2008, the artist Christian Marclay produced a series of large cyanotypes in which unwound spools of old cassette tapes swirl across the paper, a kind of drawing with both light and sound, in a commemoration of two mediums that have been rendered virtually obsolete in an age of digital technology.

D
is for
Denim
Scroll to top