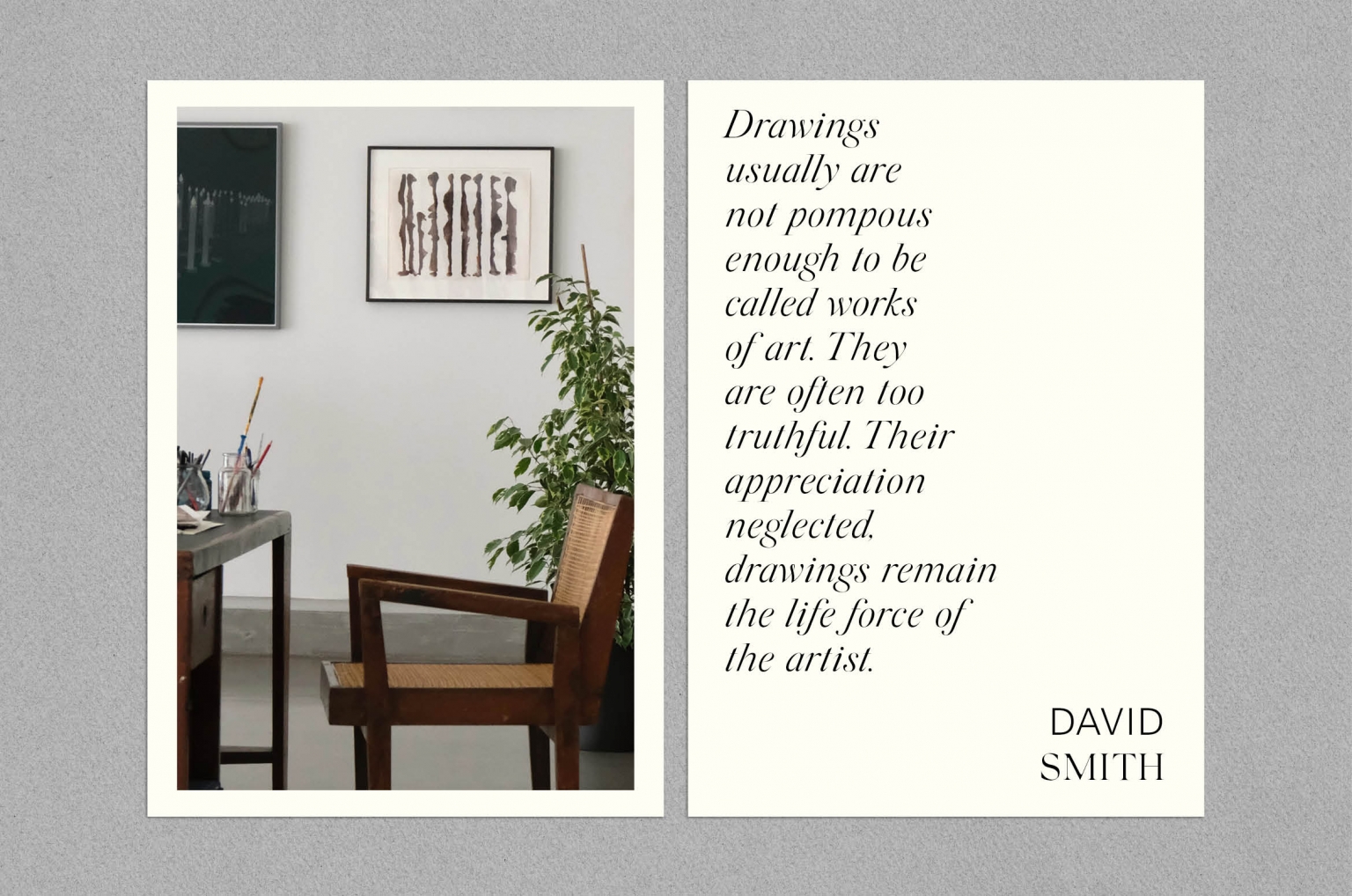 Many students think of drawing as something hasty and preparatory before painting or making sculpture. A sort of purgatory between amateurism and accomplishment. As a preliminary before the great act, because everybody can draw some, and children are uninhibited about it and do it so easily, and writing itself is a style of drawing, and it is common on sidewalks, board fences, phone booths, etc.

But actually only a very experienced artist may appreciate the challenge, because it is so common an expression. It is also the most revealing, having no high expectancy to maintain, not even the authenticating quality of gold frames to artificially price or lend grandeur to its atmosphere and, by its very conditioning, it comes much closer to the actual bareness of the soul and the nature of free expression.

It is not expected to carry the flourish, the professionalism of oil painting, nor the accuracy and mannered clarity in the formal brushing of the watercolorist.

If it is pompous, artificial, pretentious, insincere, mannered it is so evident, so quick to be detected and, like the written line, it is a quickly recognized key to personality. If it is timid, weak, overbold, or blustering, it is revealed much as one perceives in the letter or a signature. There is not the demand or tradition for technique and conformity. The pureness of statement, the honesty of expression are laid bare in a black and white answer of who that mark-maker is, what he stands for, how strong his conviction, or how weak. Often his true personality is revealed, before repetitions or safer symbols can come to his defense. More his truth than other media with technique and tradition, more his truth than words can express, more free from thinking in words than polished techniques, drawing more shaped like he is shaped, because the pressure of performance has not made him something he isn’t.

The drawing that comes from the serious hand can be unwieldy, uneducated, unstyled and still be great simply by the superextension of whatever conviction the artist’s hand projects, and be so strong that it eclipses the standard qualities critically expected. The need, the drive to express can be so strong that the drawing makes its own reason for being.

Drawing is the most direct, closest to the true self, the most natural liberation of man – and, if I may guess back to the action of very early man, it may have been the first celebration of man with his secret self – even before song.

But its need doesn’t stand on primitive reconstruction – anyone knows, everyone feels the need to draw. I truly believe that anything anyone has seen he can draw, and that everyone here has now seen everything he ever will see, and that all that stands between his drawing anything in the world is his own inhibition. What that is we don’t know. Each must dig himself out of his own mind, and liberate the act of drawing to the vision of memory. It is not so much that this correlation is impossible – but more that the mental block keeps him from trying that which he deems impossible.

We are blocked from creative ways of expressing, by the ways we feel about things, and by ways we think we ought to feel, by word pictures that cancel out creative vision, and intimidations that limit creative expression.

If drawing could come now as easily as when man was six, he would not doubt or think, he would do. But since he approaches it more consciously, and not with the child’s freedom, he must admit to himself that he is making a drawing – and he approaches mark making humbly, self-consciously or timidly. Here he finds pressure and intimidation and inhibition. But the first mark of drawing is made. Sometimes it takes courage to make this one statement. This stroke is as good as he can make, now. The next and those to come, lead towards creative freedom. He must try to be himself in the stroke. He dominates the line related to image and does not permit the image to dominate him and the line. Not a line the way others think the line should be – not how history says it once was; nor what multitudes say they cannot do with a straight line. For a line so drawn with conviction is straighter in context than the ruler.

The deviations outside the mechanical realism, which usually with a bit of hostility represents the average expectancy, are the nature of human line – the inaccuracies, so-called, are often other images trying to assert themselves in association. And the truth of image is not single, it is many – the image in memory is many actions and many things – often trying to express its subtle overlapping in only one line or shape.

Simply stated, the line is a personal choice line, or his line to himself. The first stroke demands another in complement, the second may demand the third in opposition, and the approach continues, each stroke more free because confidence is built by effort. If the interest in this line-gesture making is sustained, and the freedom of the act developed, realization to almost any answer can be attained. Soon confidence is developed and one of the secrets of drawing felt, and marks come so easily and move so fast that no time is left to think.

Even drawing made before performance is often greater, more truthful, more sincere than the formal production later made from it. Such a statement will find more agreement with artists than from connoisseurs. Drawings usually are not pompous enough to be called works of art. They are often too truthful. Their appreciation neglected, drawings remain the life force of the artist.

Especially is this true for the sculptor who, of necessity, works in media slow to take realization, and where the original creative impetus must be maintained during labor, drawing is the fast-moving search which keeps physical labor in balance.

Typescript, lecture, on March 21, 1955, at a symposium on drawing at H. Sophie Newcomb Memorial College, Tulane University, New Orleans, organized by the sculptor George W. Rickey, then chair of the Tulane Art Department.

The painter Jack Taylor and Reginald H. Neal, chair of the Art Department at the University of Mississippi, Oxford, where Smith spent the month of March as a visiting artist teaching sculpture and drawing, also participated in the symposium. Smith repeated the Tulane talk, making only minor changes, on March 26, 1959, at the opening of an exhibition of his drawings at Bennington College, Vermont; the Bennington version of the lecture was published as “On Drawing,” Bennington Review 2, no. 1 (Winter 1968): 11-12.