J
is for
Derek Jarman 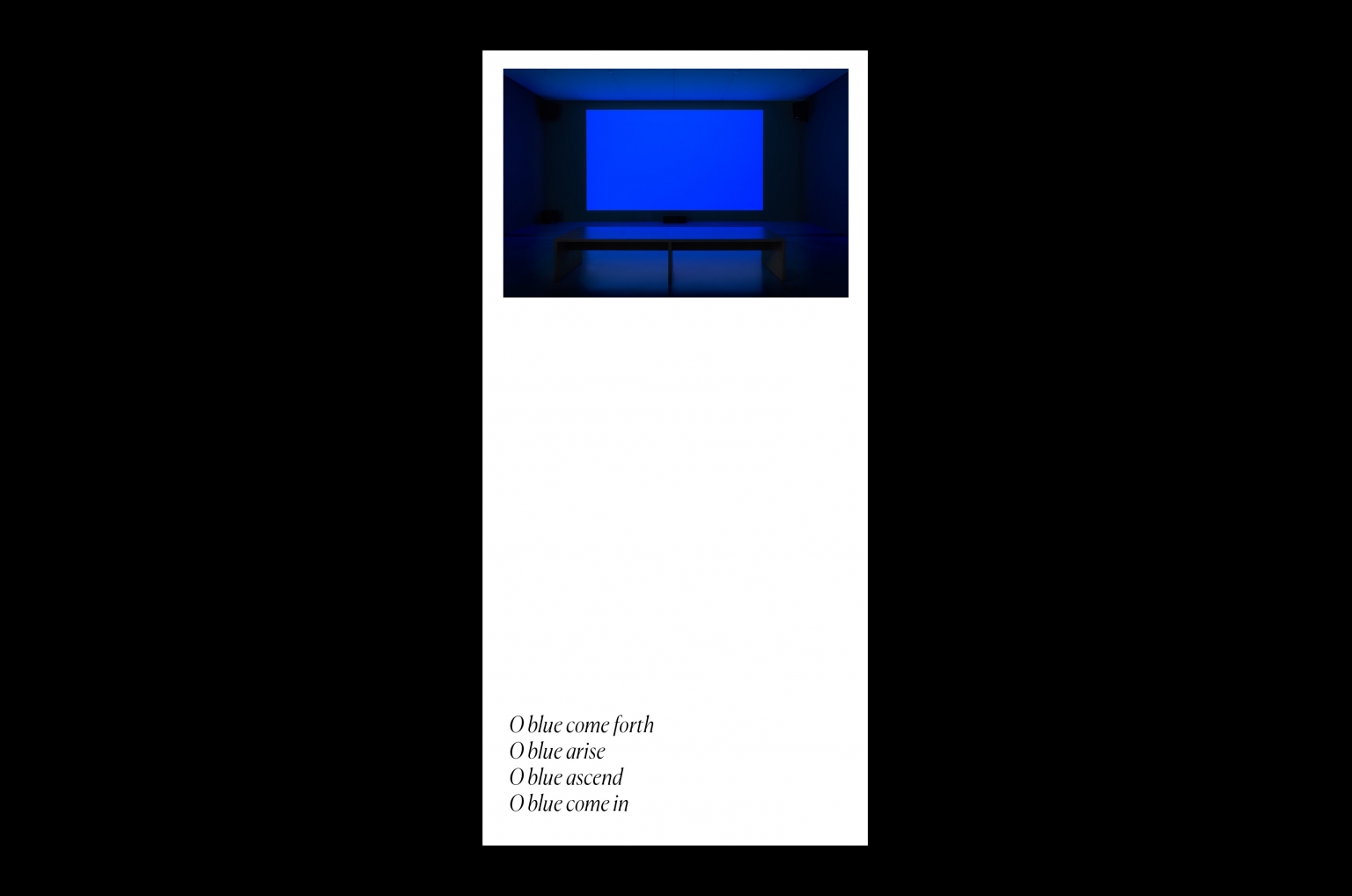 Blue light. A spectral light. Leni’s full moon falling through a crystal grotto in the High Dolomites. The villagers draw their curtains against this blue. Blue brings night with it. Once in a blue moon . . .

Tacitus tells us of a spectral tattooed army, the Pictish Britons nude in the colour of the Ethiopians, Caeruleus. Dark blue, not the sharp blue from the paint tube.

The blue men of the High Atlas are dyed by the indigo sweated from their clothes.

Blue spaces and places. The Blue Nile, and the Blue Grotto. The grotto is lit by light that is refracted through the water from a small opening five feet high into a vast cavern.
The ferrymen sing ‘O Sole Mio’. The silent magic is broken.

Black blue sadness in Geertgen’s Nativity at Night. The virginal blue robe which mirrors the blue sky is swallowed by black.

Gun metal blue. The patina of copper. Verdigris on the edge of green. Egyptian blue, a clear astringent colour that is the blue of the mosque. This is the blue of glaze.

In 1972, every wall in the studio was hung with blue capes. Everyone liked them, but no one bought them!

The blue-tail fly dances the blues in blue suede shoes.

The sky blue damselfly, iridescent, flits across the blue lagoon.

The blue Buddha smiles in the realm of joy. Dark blue embroidered with gold.
There are gold flecks in the lapis.

Blue and gold are eternally united.

They have affinity in eternity.

The Buddha sits on the blue lotus supported by two blue elephants.

The blues of Japan. The work clothes, the blue of the roofs of its houses.

The blue work clothes of France. The blue overalls here in England, and the blue Levis that conquered the world.

The great master of blue – the French painter Yves Klein. No other painter is commanded by blue, though Cézanne painted more blues than most.

Blue is hotter than yellow.

The earth is blue.
The virgin’s mantle is the bright blue sky.
This is the living blue.
The blue of Divinity.

I am writing this wearing a Japanese workman’s coat in tough linen of faded indigo. Indigo is the colour of clothes. Cobalt of glass. Ultramarine of painting. Indigo, lndekan from India, is found in woad and Indigofera tinctoria. Marco Polo noted the process of dyeing in Coulan.

Pull up the plants by the roots, put them in tubs of water till they rot. Press out the juice and evaporate it leaving a paste which is cut up into small pieces and sold.

The arrival of indigo in Europe caused consternation. Woad was under threat in 1577 in Germany. A decree prohibited ‘the newly invented pernicious and deceitful, eating and corrosive dye called the Devil’s Dye’. In France dyers were required to take oaths not to use indigo.

For two centuries indigo was hedged with legislation.

The first artificial blue was Russian, discovered early in the eighteenth century.

Ficino writes in the Platonic Academy for Lorenzo:

We dedicate the sapphire to Jove
the Lapis Lazuli was given this colour because its jovial power was against Saturn’s black bile.

It has a special place among colours.

Colour the little wall maps of the universe you are making. The sapphire colour for the spheres of the world. It would be useful not just to look at it, but to reflect on it in the soul. Deep inside your house you might set up a little room and mark it with these figures and colours.

For the Japanese, the morning glory is the English rose, or Dutch tulip – deep blue, it blossoms at dawn and fades in the sunlight.

The Japanese slept under blue mosquito nets to give the illusion of peace and cool.

You say to the boy open your eyes
When he opens his eyes and sees the light
You make him cry out. Saying
O Blue come forth
O Blue arise
O Blue ascend
O Blue come in.

Derek Jarman, excerpt from Chroma: A Book of Colour (1994) as published in our exhibition catalogue Monochrome No.2.
Derek Jarman, Blue, 1993 © Basilisk Communications Ltd. Photo: Jim Corbett © Alise O’Brien Photography
I
is for
IKB

K
is for
Joseph Kosuth
Scroll to top