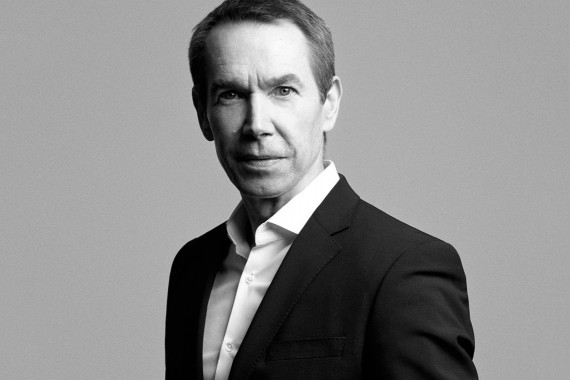 Jeff Koons is one of the most recognised and provocative artists of our age. Able to divide opinion radically between his supporters and his detractors, he manages to retain a wry distance from the fray. Much of his oeuvre has been designed in order to challenge people’s ideas of taste, and to illustrate the extent to which they are grounded in prejudice and snobbery.

Having studied at the Maryland Institute College of Art in Baltimore in the 1970s, he moved to New York, where he created his first true body of work, the ‘Inflatables’. These were essentially found objects that Koons presented by placing them on mirrors; this was an effect that was taken to increasing extremes in the ‘Pre-New’, a series of household objects such as kettles, many of which were attached to Dan Flavin-like fluorescent lights. These shrines to commodity culture reached a new apotheosis in The New, where unused, pristine vacuum cleaners and other domestic appliances were displayed in glass cases, also lit by fluorescent bulbs.

Koons’s eye for exactitude resulted in his taking a job on Wall Street to finance his early artistic projects. Associated with Neo-Geo, he gained increasing attention, showing his next series, ‘Equilibrium’, at the International With Monument Gallery, New York, in 1985. In the succeeding years, the theme of breath, discreetly apparent in his ‘Inflatables’ and in the lung-like forms of the vacuum cleaners in The New, would become a central tenet in Koons’s world view as exemplified in his bronze Aqualung. Soon, Koons’s attention turned to the nature of taste and the way in which people are controlled by it – he sought to buck people out of any sense of shame by creating works that were often outrageously and disarmingly entertaining.

Other series followed which explored these themes in new ways, be it the stainless steel sculptures of Luxury and Degradation and Statuary or the playful ‘Banality’ series, where Koons eschewed found materials and imagery, instead creating a new iconography that included sculptures made by traditional Baroque craftsmen and porcelain factories. This would soon lead to one of his most notorious series, ‘Made in Heaven’, much of which comprised images and sculptures of himself in explicit sexual positions with Illona Staller, known as La Cicciolina, whom he married. From taste, Koons had moved to the theme of sex, begging his viewers to shed any sense of shame about either.

In 1993, Koons embarked on perhaps his most iconic series, ‘Celebration’, which includes such works as the Balloon Dog; examples from this series have been shown on the rooftop at the Metropolitan Museum, New York, and in the Palace of Versailles. ‘Celebration’ almost became Koons’s downfall: his perfectionism reached new heights and he ended up spending vast sums, and amounts of time, seeking the perfect mirror finish to his monumental sculptures. The series took so long that Koons almost disappeared from the art world, springing back with an interim group of works, ‘Easyfun’. As ‘Celebration’ emerged around the beginning of the new millennium, Koons became one of the most unassailably prominent artists in the world. His works, such as the flower-covered Puppy and his Balloon Flower, have occupied civic spaces throughout the world, from Potsdamer Platz to the World Trade Center site to the Guggenheim Bilbao. Koons was also chosen as the subject of the final exhibition at the Whitney Museum of American Art before its planned move to a new venue. 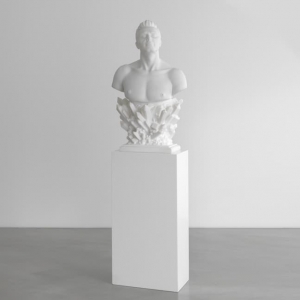